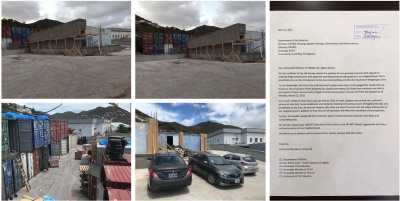 PHILIPSBURG:--- Residents of Cay Hill on Tuesday submitted a petition to Minister of VROMI Egbert Doran protesting a recent commercial development on Welgelegen Drive, on a lot designated for residential use only. The petition was also copied to Parliament and all other Ministers.

The residents said they are tired of complaining to the government without any serious response, acknowledgment, or action from the government, more specifically the VROMI Ministry. They hope that the petition of signatures yields some results and a stop is put to the illegal operation.

"To our knowledge, the lots in the outlined area/location have been pegged for residential use. However, the proprietor of this property has placed over twenty (20) forty-foot containers on the said lot and seemed to have commenced an illegal commercial operation of some sort from the location as of March 22, 2021," the petition read.

"As a result, all residents have had to put up with an influx of noise, dangerously parked cars, unknown personnel, and daily heavy equipment and container movement at various hours and on holidays. This raises our level of concern for the safety and security of our neighborhood in addition to how this sort of operation will affect the valuation of our properties. The double-stacked 40-foot containers pose a serious hurricane hazard to the direct and surrounding area," the petition read.

The residents are asking the Minister and by extension the government and Parliament for their urgent attention to this matter and look forward to a reply from the Minister soonest. 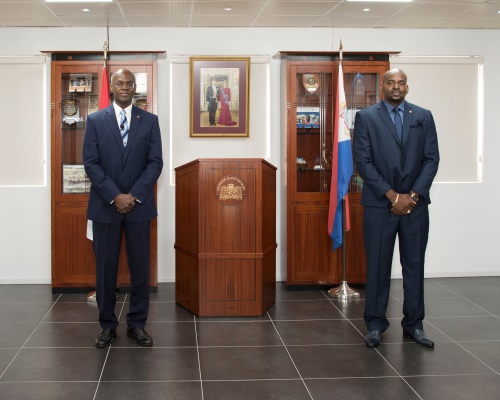 Harbour View:--- On May 21, 2012, His Excellency, Governor E.B. Holiday, officiated the appointment and administered the oath of office of minister to Mr. Omar Ottley,
Mr. Ottley has met the regulatory requirements and has been appointed as Minister of Public Health, Social Development, and Labour. During the official ceremony, which took place at the Cabinet of the Governor, Governor Holiday stated:
“On March 28, 2020, a new team of ministers and the minister plenipotentiary were installed with responsibility for the governing of our island. Today, just over one year later we are gathered for a change in the composition of the team. Mr. Omar Ottley .. in deciding to join the team you have accepted to serve in challenging social economic and financial times. At the swearing-in ceremony, just over a year ago, I spoke of the need for a united sense of urgency. Today that needs is still fully present. The coronavirus pandemic continues to pose extraordinary health and economic challenge. It is therefore vital that government continues to work to protect the critical sectors of our economy, such as health care and tourism, and with that our health, our jobs, and our most vulnerable. This calls for a persistent and united focus on the priorities of our people, in everything government says and does. The magnitude of this challenge calls for cooperation with each other as the council of ministers, with our people, with our health sector, with our businesses, and with our partners in the north, in the region, and in the Kingdom. This will foster and provide for the broad support necessary to effectively contain the disease, limit its socio-economic consequences, and ultimately secure the wellbeing of our people.

Accepting the function of Minister through the oath which you are about to take in a few moments, is
• First, a solemn expression of your commitment to perform your function with integrity;
• Second, it is your pledge of allegiance to the King and the Kingdom Charter;
• Third, it is your individual declaration to always uphold the Constitution of Sint Maarten; and
• Finally, it is your pledge to always dedicate yourself to foster the wellbeing of the People of Sint Maarten.
In that regard, you will be entrusted and as such there will rest on you individually as a minister and jointly with your colleagues in the Council of Ministers a great responsibility. Through your oath, you will be accepting the obligation to serve all the people of Sint Maarten.
And as I said you have accepted to serve in challenging social economic and financial times. At a time when there is much to do with scarce resources. Your decisions on the use of the scarce means to meet the needs of our people will have lasting influences on the lives of the people of Sint Maarten.

Thus, as you deliberate on taking action on the matters that will come before you during your tenure, I recommend that you use the oath as a guide in the performance of your function in service of the general interest. And in doing so, help to offer solutions for the challenges our people face. As such, I wish you wisdom and strength, in the performance of your responsibilities as you seek to meet your constitutional responsibility to the people of Sint Maarten.”

MP Omar Ottley was sworn in as Minister of Public Health, Social Development, and Labor, PM.

Philipsburg – Today, Tuesday, April 20, 2021, former Member of Parliament (MP) Omar Ottley was ceremoniously sworn in as Minister of Public Health, Social Development, and Labor (VSA) at the cabinet of His Excellency Governor Eugene Holiday. Minister Ottley was put forth by the United People’s (UP) party as candidate minister after Chair of Parliament Rolando Brison withdrew his name as candidate Minister of VSA. After discussions of the screening reports during the past week, it was agreed that Ottley would be sworn in as Minister of VSA as originally intended. As part of the process, outgoing Minister of VSA, Richard Panneflek made his position available via letter to Governor Holiday on Friday, April 16, 2021.

Prime Minister Silveria Jacobs stated, “As Prime Minister and Chair of the Council of Ministers, I am grateful to Minister Panneflek for assuming the position of Minister of VSA at a crucial time and wish him much success in his future endeavors. We welcome the incoming Minister of VSA to join the Council of Ministers during this very challenging period. We look forward to good cooperation in the execution of our governing program and handling of the ongoing health pandemic he will now inherit.”

Minister Ottley stated, “As incoming Minister of VSA, my top three priorities for the Ministry are tackling labour protection, the continuation of the island-wide vaccination campaign, and the completion of the St. Maarten General Hospital. It is also my intention to continue the collaboration with our French counterparts on a public health level to ensure that the management of the pandemic is synchronized in order to attain a full measure of “herd immunity” in the country. I look forward to serving the people of St. Maarten together with the Council of Ministers, my support staff, and the entire Ministry of VSA.” 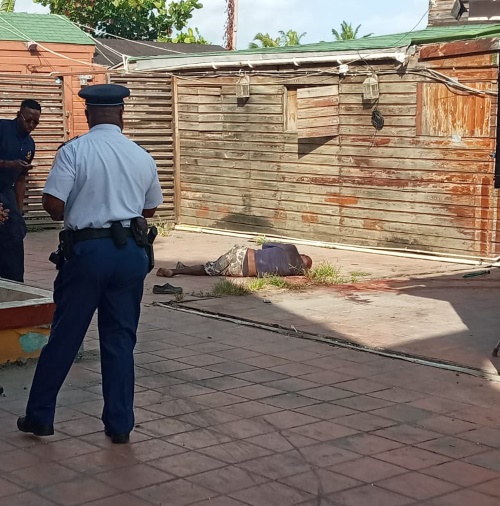 ~ Victim in a coma at SMMC~

PHILIPSBURG:--- Detectives are busy investigating a robbery that took place Monday night at Topper's in Simpson Bay.
According to information reaching SMN News, the armed robbers attacked and beat a well-known street vendor known to all as coconut man leaving him in a comatose state at the St. Maarten Medical Center where he is taking treatment.
Police Spokesman Joe Josepha confirmed the robbery that took place Monday night, he said that money was stolen from the business establishment while the victim that was brutally attacked is in a comatose state at SMMC. Josepha said the police are busy with the investigation.

Victim severely injured by suspects during a burglary.

The police dispatch center received several calls on April 20 around 7:50 am about a man laying on the ground behind a well-known restaurant on Welfare Road.
When the patrols arrived at the scene, they found a man on the ground bleeding profusely from his head
Ambulance personnel was summoned and they tended to the 67-year-old man, who lives behind the restaurant. He was rushed to St. Maarten Medical Center in critical condition.
The preliminary investigation indicates that the suspects had assaulted the victim and then broke into the restaurant. They stole money and jewelry from an office.
Police searched Cole Bay and Cay Bay but did not locate the suspects.
The Detective Department is investigating this burglary and ill-treatment case. Anyone who may have any information regarding the case is asked to contact the Police at +1 721- 542 22 22 ext. 204 or 205. Persons can also use the anonymous tip-line by dialing 9300 or send a message to our Facebook page. (Police Force of Sint Maarten - Korps Politie Sint Maarten)
The Police Force is asking the community of Sint Maarten and businesses to remain vigilant.