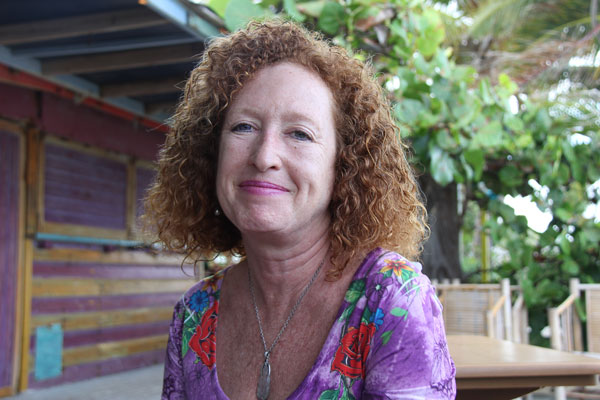 Orient Beach:--- The owner of Bikini Beach Elisa Cohen has hope and she is also confident that the French justice system will grant her and the owner of Kontiki Beach Philippe Juste justice. In an interview with SMN News, Cohen said she filed a complaint of fraud and illegal use of her business name against Norbert Luftman the owner of Sindextour who collected over half million euros from her while he was not in possession of an AOT. Cohen is also contesting the issuance of the AOT which was given to Luftman in September 2012. Elisa Cohen is not only fighting the businessman who defrauded her but she is going up against the Collectivity of St. Martin, especially the President of the COM Alain Richardson whom she claims lied to her and her lawyer when they met in a scheduled meeting in July 2012. "In a meeting held at his office on July 13th, the President told me that he was not aware of the issuance of any AOT neither did his executive council discuss an AOT they intended to issue to Sindextour owned by Norbert Luftman even though we discovered later that he was one of the persons who attended the executive council meeting on April 17th, 2012 when the executive council took a decision to grant Sindextour the AOT." What is more disturbing is that the agenda and decisions taken in the executive council meetings are normally published both on COM's website and in the Official Journal but the one of April 17th, 2012 was never published on the website until the time passed for us to refute the decision. Despite the fact that my lawyer sent several requests in May and June to the COM about the decision that we heard was granted through rumors, he never got any reply from the COM. Can you imagine we also discovered the President scheduled a meeting with us on July 9th and he obviously rescheduled the meeting to July 13th so that he could claim that he published the decision taken on April 17th on May 15th, one day after the meeting with him and we could not contest the decision, yet the President chose to lie to us and our lawyer on the day we met (July 13th), telling us that "at his best knowledge" no AOT was granted to SINDEXTOUR or LUFTMAN. "I have been doing business, a legally registered business, on St. Martin for 20 years, while Philippe Juste of Kontiki Beach has been doing business here just over 10 years."
Cohen said that they looked everywhere and even asked the Prefet to inform them if any AOT was issued to Lufman when they found out that he had no AOT. Elisa Cohen said in February 2012 she and Phillipe Juste went to the Collectivity and requested an AOT. The file was stamped by DGS Pascal Averne. She said they took a copy of their demand to the Prefecture and got it stamped while they also took the same request to the Reserve who also stamped their request. "We made sure everyone knew that we were asking for our own AOT because we are willing to pay the Beauperthuy or the COM but not Norbert Luftman anymore."
Cohen further explained that besides that the property the former commune was leasing out is not domain land. She said when she first started to do business on the property one of the Beauperthuy heirs visited her and told her that the property had belonged to them and she told him if he had proof that he was lawful owner then she had no problem doing business with the rightful owners but up until then she had to respect the contract she had with Norbert Luftman. "I am an American citizen when I came here I knew nothing about the French laws so I did what I was told to do and believed the people I was doing business with was honest. Furthermore, even though I am American my business is fully legal including all my workers some of my workers have been working for me for the past 20 years."
Cohen further explained that even though Luftman had no contract and was collecting rent he gave them a contract which Luftman always claimed to be fully legal and binding. However, since the COM granted him an AOT in September 2012 Luftman has decided to make life and business impossible for them because he refused to allow them to rent their own chairs and umbrellas to their clients. Cohen said she is forced to rent umbrella and chairs from Luftman and the COM has refused to intervene in their defense. She some months ago they filed a court case against the COM and the day before the hearing the COM decided to hand deliver a notice to them informing them that their request for an AOT has been denied.

Referring to the Authorization D' Occupation Temporaire for Orient Beach brings a whole new discussion that the Criminal Courts would have to decide because former Mayor Albert Fleming granted his friend Norbert Luftman an AOT for a parcel of land that was not part of domain land (50 pas geometrique). Orient Beach belongs to the Beauperthuy families who already got the court to validate that they are the legal and true owners of the land that is leased out by the former commune. The owner of Orient Beach is the late Daniel Beauperthuy. Since the late Daniel Beauperthuy died and most of the heirs of his property were not on St. Martin, the former Mayor who led the commune for almost 30 years willfully granted an AOT to Luftman. According to court documents provided to SMN News, AW33 belonged to the Beauperthuy families from 1840 to 2011. In 2011, the court decided to grant the COM AW33 for unknown reasons. A decision the Beauperthuy families are contesting because in two prior court decisions the lower courts validated the property for them since they are the true heirs of the late Daniel Beauperthuy. The Beauperthuy's owned AW 29, AW 30, and AW 33. In January 2011, the court awarded AW 33 to the COM while the other parcels remained with the Beauperthuy's.
Norbert Luftman has said to other reporters that he requested the renewal of his AOT since 2008 or 2009 but the President of the COM during that time did not renew the AOT because they knew that the property is not part of the 50 pas Geometrique and that the true owners of the property were in court about the ownership of the properties. The former President of the COM Frantz Gumbs told SMN News reporter that he (while in office) could not grant SINDEXTOUR an AOT when he knew of the court proceedings and he also knew that the owners of Bikini Beach and Kontiki Beach had asked for their own AOT.
In short, everyone knew that AW33 did not belong to the COM in 2008 or 2009 when Luftman claims he made a request for renewal. Everyone knows that AW30 and AW33 are Beauperthuy's property since 1840 until 2011 for AW33 and permanently for AW 29 and AW30. Everyone knows also that Cohen and Juste filed a request for AOT in February 2012 on AW33 when at such date the COM had rights on such land. Everyone knows that such land is wide enough to accommodate the 2 new restaurants which Luftman built last August nearby Cohen's and Juste's operations and using identical names. Everyone knows that it is totally unfair if not deeply illegal to ignore Cohen's and Juste's requests and even more to lie to them on July 13th about the fact that no AOT was yet given.
Despite what everyone knows, the COM is still supporting Luftman's request for his renewed AOT to give him the right to evict Cohen and Juste! Why? What is COM's real motivation when it is obvious they could stream more revenues and rent from multiple operators, than giving SINDEXTOUR a monopolistic situation in Orient Bay?

Click here to view the signed AOT issued by the RRR Government to Norbert Luftman.