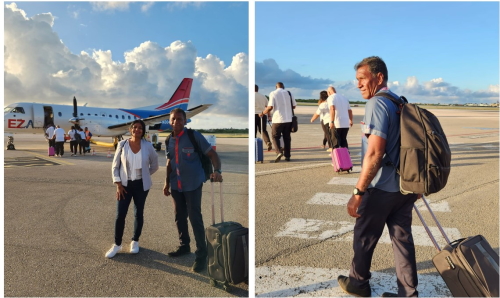 BONAIRE:--- Recently January 18, 2023, Mr. James Finies president of Nos Kier Boneiru Bek, and Mrs. Davika Bissessar president of Bonaire Human Rights departed Bonaire to continue with the second phase of the international campaign and trajectory of Relisting Bonaire on the Non-Self Governing Territories list by raising awareness and seeking solidarity for the case of Bonaire to be presented in the 77th General Assembly of the United Nations.
On the dissolution of Netherlands Antilles on October 10, 2010, Bonaire was illegally annexed and incorporated in the Dutch Constitution under unequal rights where the People of Bonaire are governed since then from The Hague against their wishes who voted 66% No overwhelmingly in a 2015 referendum to reject the current imposed colonial rule status.
We lobbied for over 300 consecutive days last year where we had meetings and presented our international report among others to the president of Chile Gabriel Boric, prime minister of Belice Johnny Bricenjo, prime minister of Grenada Dickon Mitchell, prime minister of Barbados Mia Mottley, prime minister of Saint Vincent Ralph Goncalves, president of Suriname Chan Santokhi, Secretary General of the United Nations Antonio Guterres and lot more leaders and authorities of almost all Latin American and Caribbean. As a result, hereof today more countries in the world, especially Latin America and the Caribbean know of the suffering of Bonaire, its inhabitants since 10th October 2010 who have been stripped of their culture, their language, identity, and most precious thing, the Kingdom of the Netherlands, has taken away our right to freedom and equality.
Now we have friends in the whole of Latin America and the Caribbean that are in solidarity with the people of Bonaire and are supporting our trajectory of relisting Bonaire on the NSGT and to present the case of Bonaire to the General Assembly of the United Nations.
Colonialism is a Crime against Humanity, and we promise to keep fighting as long as is necessary to bring justice and respect to the people of Bonaire for their freedom and equality and for future generations to enjoy these sacred and fundamental rights.