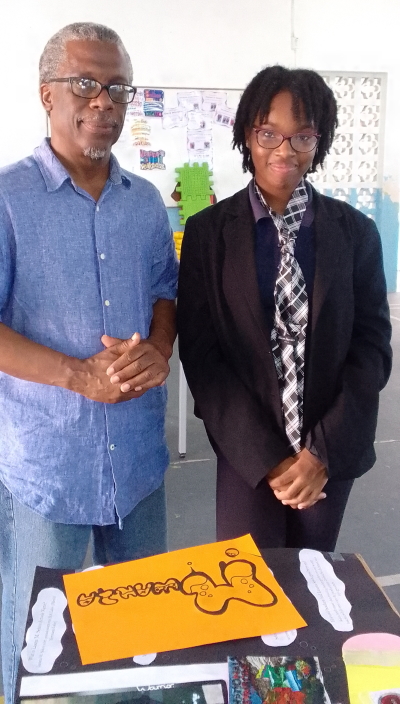 SIMPSON BAY:--- HNP authors, along with historical personalities and elements in nature made up the Living Museum here on November 10, 2022, said Jacqueline Sample, president of House of Nehesi Publishers (HNP).
The annual exhibition of the Sister Regina Primary School is part of a learning “unit” that begins in September, “exploring our beautiful island and learning about our history, culture, geography and more,” said sixth-grade teacher Candace Huijgen.
The project always concludes with the “Living Museum of Sint Maarten’s Heroes,” said Huijgen, just before the island-wide celebration of St. Martin Day on November 11. The school also invites members of the community and public figures who the students are personifying to view the live exhibits.
This year HNP authors Ruby Bute and Lasana M. Sekou were personified in the museum by students Jason C. and Jushana Azille, respectively. The school’s Group B sixth graders select or are assigned a person that “was or is of interest to St. Maarten,” or a cultural or environmental symbol or object to study, dress like, make related props to exhibit, and represent, said Huijgen.
“I love to hear about, follow, and learn from projects and events that have so much to do with literature and literacy for St. Martin children,” said Sample, who was visiting the island during the museum exhibition.
The Living Museum is set up along the school’s exterior corridor and in the gymnasium. The museum figures talk about who or what they are representing to anyone who walks up to the exhibition table and presses a make-believe digital button to start the conversation.
The territory’s newly appointed Governor Ajamu Baly was not only a first-time museum figure in 2022 but was invited and graciously attended the event, said Sample.
Political leaders Claude Wathey, Silveria Jacobs, and Sarah Wescott-Williams, writer Loekie Morales, kaisonian Mighty Dow, Dutch King Willem-Alexander, Clara Reyes, Father Kemps, an Arawak, the Brown Pelican, and Flamboyant tree, were represented at the museum.
There were also representations of a pirate, Saint Martin, drs. Eugene Holiday, Emilio Wilson, Peter Stuyvesant, Soualiga – Land of Salt, and roundabout statues such as the legend of One-Tété Lokhay and the Freedom Fighter, according to Huijgen.
At least 10 of the museum’s 26 human representations and personifications of symbols and objects could be drawn from books published in St. Martin by HNP or would have available HNP books such as National Symbols of St. Martin, Claude – A Portrait of Power, Golden Voices of S’maatin, and St. Martin Massive! as information sources and exhibition guides, said Sample.