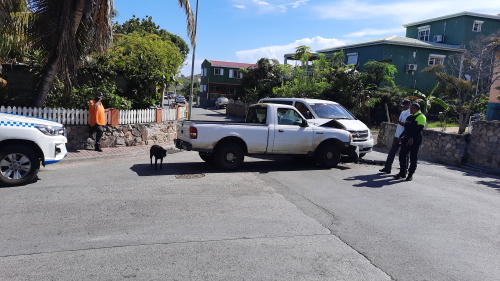 PHILIPSBURG:--- Police are seeking a man who fled the scene of a traffic accident he caused at the junction of Sucker Garden Road and Middle Region Road at approximately 8:30 am today, Wednesday, August 17, 2022. Police hailed the driver of a white pickup to stop based on road tax requirements after he was spotted with an old French license plate on Oyster Pond Road heading towards Philipsburg.

Instead of stopping the driver chose not to stop and accelerated down a side street that connects to Middle Region Road. A few minutes later, police in pursuit observed the pick-up driver overtaking about five cars on Middle Region Road in his attempt to evade them. 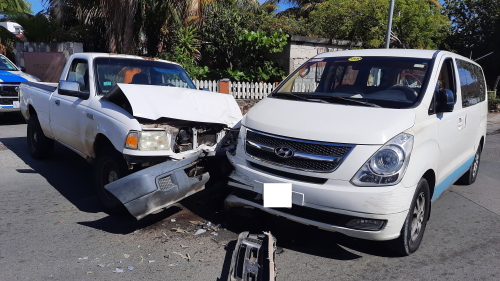 In his haste to shake off police, he slammed his pick-up into a white Hyundai bus on Middle region Road. Following the impact, the pickup driver fled into the nearby bushes and disappeared. In spite of a search, the patrol was unable to find him.

The driver of the white van did not sustain any serious injuries.

The Police Traffic Department is conducting further investigation into this incident.