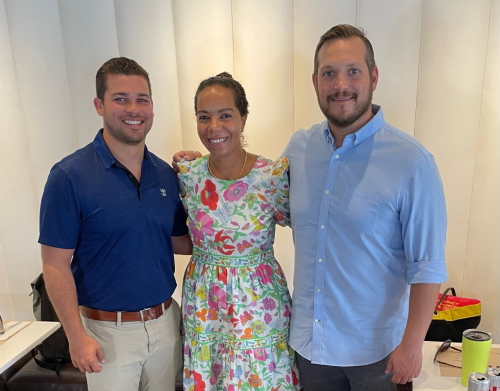 MP de Weever was delighted to catch up with the team that helped bring the home porting project with Celebrity Cruise Lines to fruition during her tenure in office as Minister of Tourism, Economic Affairs, Transport, and Telecommunication. The RCG team was on the island to continue discussions with members of the Council of Ministers and the management of the Harbor Group of Companies.

Sint Maarten has long been one of the preferred destinations of cruise passengers yet with one of the lowest head-tax rates. While this low rate was part of agreements made some 20 years ago, MP de Weever remains positive that continuity exists in government and it should result in a rate more consistent with the rest of the region, which would bring even greater economic benefit to the island as outlined in the pandemic adjusted economic recovery plan presented in 2020.

“Homeporting helped create the blueprint for the entire industry to safely restart not just in Sint Maarten, but in the entire Caribbean and it happened here,” MP De Weever stated. She reemphasized that the event put Sint Maarten back in the news on an international scale, thanks in part to the exposure RCG brought through media names such as Emmy award-winning News Travel Editor Peter Greenberg of CBS News, who was present to report on the large-scale cruising restart from the Sint Maarten Port, the first to do so in the Western Hemisphere after the shutdown in 2020. In addition, MP de Weever has always stressed the importance of maintaining continuous communication with local and international stakeholders in order to continue seeing progress for the island.