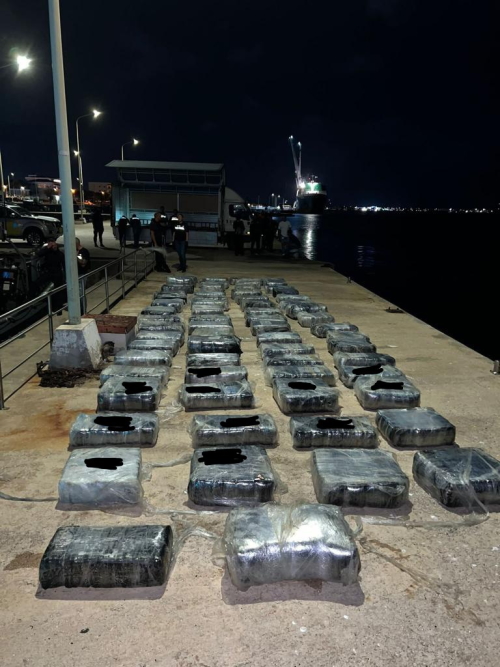 WILLEMSTAD:--- Zr.Ms. Groningen, which is currently sailing for the Dutch Caribbean Coast Guard makes it quite difficult for drug smugglers in the Caribbean Region. The patrol
ship in sailing in the region since April 2022. Since then she added a great number of drug seizures to her list. Yesterday another go-fast was intercepted
with more than 1.600 kilograms of drugs. The total amount of confiscated contraband now amounts to more than 5.500 kilograms for the Dutch Caribbean
Coast Guard.
The last quantity was confiscated on August 8th, after a smuggling vessel was intercepted. The go-fast was discovered the night before by the Maritime Operation
Centre (MOC) of the Dutch Caribbean Coast Guard. The MOC alarmed the Zr.Ms. Groningen immediately. The ship was present the next morning in the area and
launched both fast interceptors (FRISC’s), which intercepted the go-fast. Shortly before that, the crew on board of the go-fast threw the packages of drugs
overboard when they realized they were being chased. Once Zr.Ms. Groningen was alongside, the go-fast was ordered to stop and the suspects surrendered. The crew of Zr.Ms. Groningen and the Dutch Caribbean Coast Guard removed 66 packages with a total of 1.600 kilos of drugs from the water.
The eight suspects and the contraband have been handed over to the ‘Korps Politie Caribisch Nederland’ (KPCN) for further handling of the case. The contraband has now been destroyed.