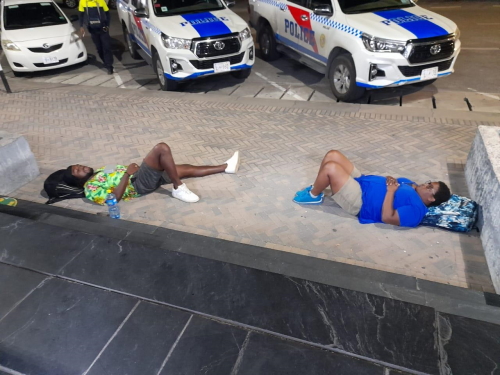 PHILIPSBURG:--- A French national who was deemed homeless after being released from prison is now sleeping in front of the Philipsburg Police Station.
According to information provided to SMN News the man, who is now in the company of another was evicted from his aunts’ house by police and the prosecutor after the man moved in some of his friends into the home.
SMN News learned that the man’s aunt provided shelter for him with the intention that he would seek employment and resume a normal life but instead, the man did not make any effort to advance his current state of life, instead, he moved in with other people into his aunts’ house which did not sit well with her, so she called in police who assisted with the eviction.
SMN News further learned that the man a French citizen have decided to take up his nightly abode in front of the Police Headquarters because he was evicted by them.
Police Spokesman Joe Josepha has confirmed that the man is sleeping in front of the police station.