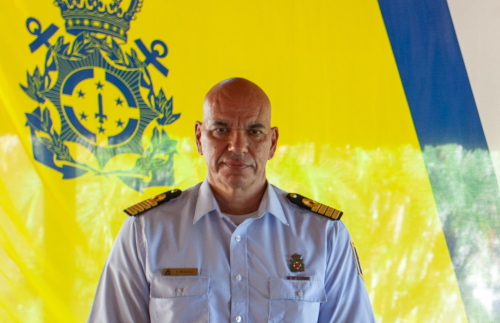 PHILIPSBURG:--- On July 8th, 2022 Eugene Middelhof will be saying goodbye to the Dutch Caribbean Coast Guard. Since July 2017 Eugene Middelhof holds the position of Deputy Director of the Coast Guard.
In his position, he managed the various business processes within the organization such as the management consultation and the GMR. As Deputy Director he was the chairman of the consultation with the Joint Participation Council (Gemeenschappelijke Medezeggenschapsraad). He has ensured that this body is properly secured by the Coast Guard. In addition, he has devoted himself to other important facets within the organization such as integrity, safety, and the environment, as well as filling various positions within the staff of the Coast Guard.
During the past 5 years, Eugene has devoted much energy and passion to the Coast Guard and has given his full interpretation of the creed ‘Samen Sterk’ with his heart and soul. The staff and personnel of the Coast Guard thank Eugene for his input and wish him much luck in his further career.