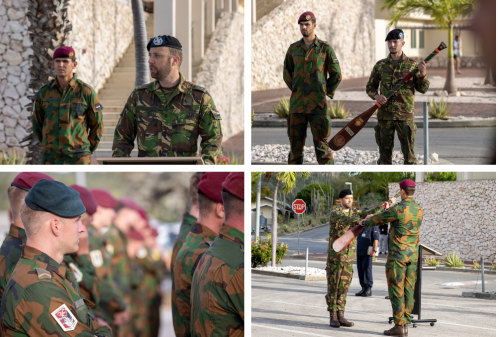 WILLEMSTAD:--- Through the traditional paddle transfer of Captain Tom from the ‘Compagnie in de West (CidW), rotation 39’, duties were transferred to his successor Major Rian from rotation 40. The CidW is a permanent unit of the Royal Netherlands Army, in the Caribbean region, that can provide support for the three main tasks of the Netherlands Forces in the Caribbean.
The departing unit consists of soldiers from the 11th Airmobile Brigade from Schaarsbergen (The Netherlands). During the last months this company executed several exercises, she contributed to the maritime event Velas Latinoamerica Curaçao and they were on standby during a storm passage along with the ABC islands. Captain Tom, therefore, looks back on a good period of time. “A few moments ago I turned over the command of the CidW to my successor. Tomorrow we will return to the Netherlands. I am looking back on 4 intense months, a valuable period of time, through which we as a unit grew tremendously. I would like to thank everyone for the pleasant cooperation and wish our successors the best of luck!” The new Commander of the CidW, Major Rian, anticipates the coming 4 months. “As of today, I received the leadership over CidW-40. With a complete new composite company from various units of the Operational Support Command Land (OOCL), we are taking on this great challenge. I am sure that with all our specialists we can be of great added value in the Caribbean region, and I look forward to the cooperation with our colleagues from the Royal Netherlands Navy. Lastly, I would like to thank the personnel of CidW-39 for the fabulous reception on-site and I wish you a very nice leave.”
The OOCL is a unit within the Royal Netherlands Army, in which all operational support has been brought together. These are units of a specialist nature in various fields. In this way, the CidW-40 has an engineering capacity that ensures the construction and maintenance of complete (military) infrastructure. Think hereby of roads, buildings, bridges, water, gas, etc. For this, it has an extensive range of construction vehicles and tools. In addition, a reconnaissance unit is also part of this rotation. This unit is specialized in conducting reconnaissance in a military area of operations, but can also be deployed for surveillance and security tasks.
Both units support the emergency services and authorities on a regular basis. Supporting the local authorities is also one of the main tasks of the Netherlands Forces in the Caribbean.
In the first weeks, the new company will prepare itself for the upcoming rotation. They do this by organizing team-building activities and completing an internal training program.