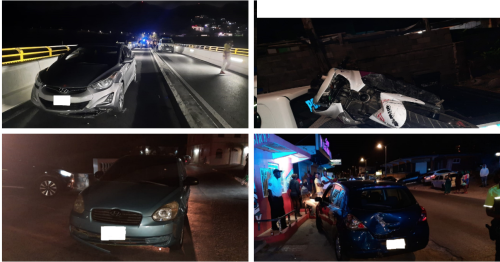 PHILIPSBURG:--- Over the last few days, traffic department personnel had to conduct several investigations into traffic accidents in which scooters were involved and whereby the riders suffer severe injuries.
In several of these traffic incidents, the investigation was hampered because the scooters involved in the collision were removed from the accident site by unknown persons.
One such case happened on Monday evening, June 27, 2022, at 11:30 p.m., when Central Dispatch received a report of a scooter rider being injured on A. Th Illidge road during a collision with a car.
Upon arrival at the scene, unidentified persons were attempting to remove the scooter involved in the traffic incident from the scene.
Nevertheless, the patrol succeeded in preventing this from happening and took the scooter in the interest of further investigation into safekeeping.
Most of the accidents involving scooters that are being investigated over the last few weeks have to do with the ongoing epidemic of risky behavior being shown by some of the riders.
The police force of Sint Maarten (KPSM) is letting it be known that this behavior is not holding well with us or the general public. Police are not going to tolerate this level of behavior on the road. If the scooter riders intend to run the gauntlet, then they will suffer the consequences when caught.
It revealed that the human factor appears to be the most prevalent contributing factor to road traffic crashes. This includes both driving behaviors such as reckless driving and violating the traffic law of Sint Maarten.