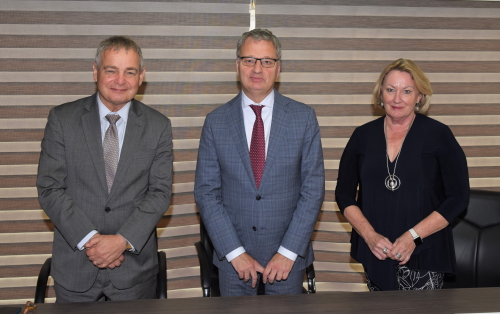 Oranjestad:--- The economy of Aruba is recovering well. In the months of April and May, tourism has surpassed the pre-corona level of 2019. Aruba has to utilize this period of recovery to put the budget in order. It is necessary that Aruba follows the recommendations the CAft made with regard to the adopted 2022 budget, limits the deficit to 2022, and achieves a surplus of 1 percent of GDP on its budget as of 2023. Reducing the government debt of AWG 5.9 billion (about 104% of GDP) to an acceptable level remains an important issue. In addition, reforms need to be implemented to safeguard the social security system for future generations.

The multi-year picture, as presented in the adopted 2022 budget, shows that there will be deficits up to and including 2026. As a result, the nominal national debt will increase further in the coming years. Interest rates are now rising, and significant refinancing is underway. It is essential that Aruba reduces its deficits because otherwise, the interest charges could become unmanageable. The CAft has made recommendations that should lead to a reduction of the financing deficit this year and a surplus of 1% of GDP as of next year. The sustainability of the Aruban debt also makes this necessary.

As of April 2022, tourism has surpassed the pre-corona level. With this rapid recovery of tourism, the economy is also expanding. According to the latest insights, the economy grew by 17.2 percent last year. Notwithstanding, the 2022 budget is showing a deficit of AWG 236 million for the public sector (4.2 percent of GDP). The CAft has made recommendations for the 2022 budget, which mainly concerns expenditure control. For example, the costs for goods and services in the budget will increase by 22 percent compared to the pre-corona years, while the need for this excessive increase in costs is insufficiently justified. Personnel costs and the country’s contributions to government-owned companies also increase unnecessarily. The recommendations of the CAft have not yet been followed, which means that for now the deficit this year is unnecessarily high.

Tax reform will be implemented as of 2023, of which the introduction of a VAT (BTW) is an important part. The tax benefits arising from this reform have not yet been sufficiently clarified in the budget. This makes it impossible to establish the reality level of the tax benefits. It should be noted that the legislative process for the introduction has not yet started. Failure to meet the intended implementation date, January 1st, 2023, will therefore affect the financing balance in 2023.

Reforms in social security and health care are necessary to ensure the sustainability of the system for future generations. The resulting savings of AWG 60 million are the first step toward sustainable care and should ensure that the country does not have to make a contribution in the short term to compensate for the deficits in the AZV. Because the introduction of a personal contribution and the austerity of the positive list of medicines and bandages have not yet been formalized, Aruba does not expect to achieve the pursued saving of AWG 60 million in 2022. It is very important that these measures be implemented in the short term. A delay in the implementation of these measures leads to savings losses. In the absence of compensation for these savings losses, the result of the AZV will be negatively affected, as well as the financing balance of the country, should a national contribution be required to compensate for the deficit in the AZV.

The CAft visited Aruba on June 23 and 24 and held talks with the Governor, the Minister of Finance and Culture, the Council of Ministers, and the Committee on Finance, Government Organization, Culture and Sport of Parliament. The CAft also spoke with the management of the Social Insurance Bank (SVb), the General Audit Chamber (ARA), and Dr. Horacio E. Oduber Hospital (HOH).