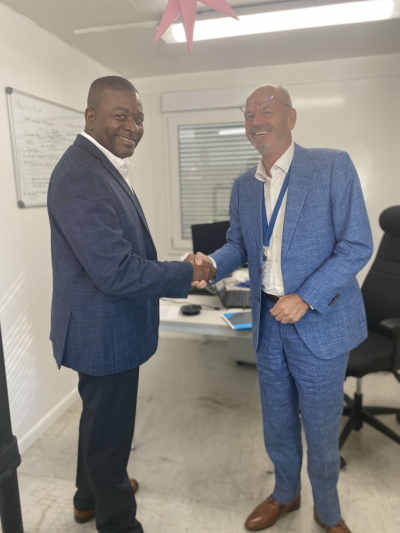 Simpson Bay:---  Princess Juliana International Airport Operating Company (PJIAE N.V.) completed yet another milestone in the selection process for the new Baggage Handling System for the Airport Terminal Reconstruction Project. A bid opening committee for the Equipment Package convened at the construction site office, to systematically open the electronically submitted bids on January 11, 2022, at 3:00 pm.

The bidding process attracted international interest and resulted in the submission of bids ranging from US $5m to US $18m. Three (3) major bids were submitted to the Project Management Unit (PMU), which presides over the bidding process. Submissions were forwarded by companies which included Alstef Group (Canada/Caribbean), ULMA (Spain), and G & S Airport Conveyor (North America).

The bidding process is being performed according to the World Bank procurement regulations. The bidders were required to submit their bids on Tuesday, January 11, 2022, before 2:00 pm. The submissions were opened under the supervision of Baker Tilly, an independent Auditor, contracted to ensure integrity and compliance under specific guidelines.

The project consists of eight (8) packages to be procured which include a mix of one (1) Works Package and seven (7) Goods Packages. The Main Works contract has since begun and is now followed by this Equipment Package bid for the supply of the new Baggage Handling System. Based on the project’s timeline, the upcoming milestones include the bid evaluation which began on January 12th, 2022, and the contract awarding which will be fulfilled by February 2022.

PJIAE N.V. encountered a devastating hurricane period in 2017 and the Managing Board is determined to complete the reconstruction development. The completion of the Airport Terminal Reconstruction Project is scheduled for 2023.

The funding for the reconstruction was attained from the Government of St. Maarten through the European Investment Bank (EIB) and the World Bank (WB). It is managed by the Recovery, Reconstruction, and Resilience Trust Fund. The proceeds from the Trust Fund and the EIB were provided as loans by the Government of St. Maarten to the PJIAE N.V. Meanwhile, the disbursement of the loans is administered by the National Recovery Program Bureau (NRPB).

For detailed information regarding the St. Maarten Airport Terminal Reconstruction Project, online users may visit the Airport’s website to access the “construction” tab at www.sxmairport.com.