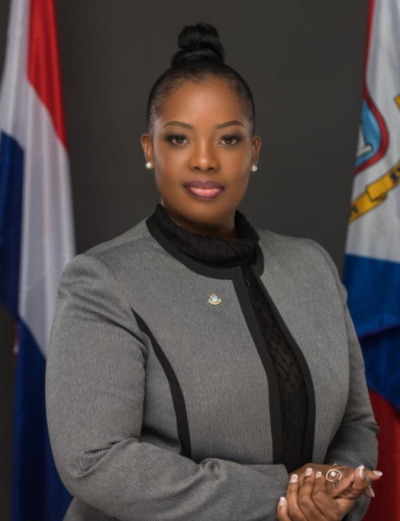 PHILIPSBURG:--- On Monday, January 10, 2022, the Honorable Minister of Justice Anna E. Richardson signed a three-year contract with a new Electronic Monitoring (EM) provider company named Buddi Ltd. Buddi Ltd. is a company based in the United Kingdom, with extensive experience around the globe in the field of EM equipment (ankle bracelets) and monitoring software. The procurement of this contract was realized by a public tender procedure in which different stakeholders in the Justice chain had an important role in the evaluation of bids. The starting date of the contract is February 1, 2022, and consists of the lease of 20 ankle bracelets. This means that the number of ankle bracelets that can be used will be doubled compared to our current capacity.
“Minister Richardson stated, I am grateful to the Ministry for having finalized this process that will allow for less pressure on our Justice chain. Finding innovative solutions for the corresponding Justice institutions to carry out their tasks is a step in the right direction. Whilst the construction of St. Maarten’s new prison and an enhanced rehabilitation facility remains one of my top priorities, this contract for 20 ankle bracelets allows for a less populated Point Blanche prison.”
EM is a multifunctional tool that can have a strong impact in the field of crime prevention, the protection of victims as well as rehabilitation and reintegration of offenders. Based on our legislation, EM can be used in different stages of a criminal process. That is in the early stage in the process, as a special condition of the suspension of pre-trial detention. The magistrate judge can, in their authority, or upon the request of a lawyer or the prosecutor, decide to suspend pre-trial detention. The severity of the alleged offense and the possible risk for the society of releasing a suspect on pre-trial detention on EM is taken into consideration when deciding on EM for the suspension of pre-trial detention.
EM can also be used as a special condition attached to a (partly) conditional sentence imposed by the court. It is the judge who decides on the sentence and the conditions of a sentence. Therefore, it is also the judge who decides if EM is a suitable special condition in relation to the crime committed. In the final stage of the criminal process, EM can be used as a special condition of (early) conditional release (VI).
In general, a detainee can be eligible for VI after two-thirds of their irrevocable sentence. Due to the lack of cell capacity at the Pointe Blanche prison, EM is currently regularly used in cases of early VI. However, an inmate does not have a legal right to be released early on VI with an ankle bracelet. The behavior of an inmate during detention can for example have an impact on a decision to grant early VI with EM.
The Ministry of Justice will be taking all the final steps that are necessary for the coming three weeks to complete the preparation process for the start of the new EM provider on February 1, 2022.