PHILIPSBURG:---  A serious traffic accident took place on A.J.C. Brouwers Road, near Ace Hardware, where a pedestrian was struck by a scooter while crossing the road on October 18, 2021. The preliminary investigation showed that a car driver gave a pedestrian an opportunity to cross the road. A scooter rider coming from the Churchill roundabout overtook several vehicles on the same road as he headed in the direction of Cole Bay. The Scooter rider hit the pedestrian and struck a white i10 car. The rider fell off his scooter a couple of meters further up the road.

The pedestrian sustained severe injuries to his body due to the collision. He was treated by paramedics at the scene and rushed to Sint Maarten Medical Center. Due to the severity of his injury, he had to be airlifted to Panama. The scooter rider also sustained injuries and was taken to SMMC for further treatment. The investigation into the incident is still ongoing. 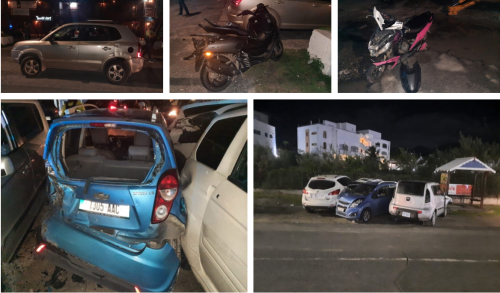  The Traffic Department is investigating a traffic accident that occurred on Airport Road near Little Jerusalem on October 23, 2021, around 11:00 pm. According to a preliminary investigation, it appears that the driver of a grey Hyundai Tucson turned onto the road from the shoulder and did not pay attention to oncoming traffic hitting two scooter riders. They suffered minor injuries and were treated at the scene by paramedics. The investigation into this accident is still ongoing.

 On Sunday morning, October 24, 2021, at approximately 01:25 am, a police patrol was dispatched to Welfare Road for a three-vehicle crash. According to the preliminary investigation, it appears that the driver of the Kia Soul was driving at such high speed that he lost control of his vehicle and slammed into the other two cars. All three cars were badly damaged. This investigation is ongoing.

Speeding, changing lanes without looking, hopping scooters and motorbikes, and ignoring road signs are all classic signs of reckless driving.  Illegal driving habits are one of the most common causes of road accidents on our island

Reckless driving usually involves a motorist that is less concerned about other road users than they are.

Abide by the traffic rules, it may save your life