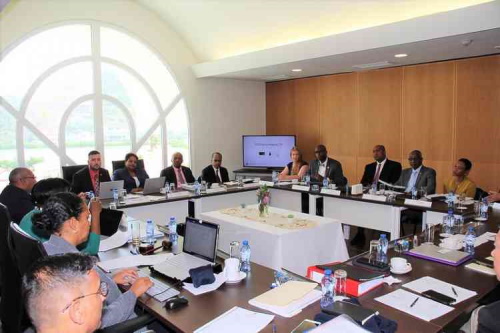 PHILIPSBURG:--- “It is truly remarkable how the people of St. Maarten had to be subjected to media reports of another groundbreaking ceremony at the Princess Juliana International Airport (PJIA) without a single mention of US Pre-Clearance,” remarked Stuart Johnson former Minister of Tourism, Economic Affairs, Transportation and Telecommunication (TEATT).
“When last has the committee for US Pre-Clearance had a meeting? What is the vision and position of the NA/UP Coalition Government regarding US Pre-Clearance? Have the collective individual positions of the various supporting Members of Parliament (MPs) changed or what is their view now? Have there been any developments regarding the completion of US Pre-Clearance since 2019?” Johnson questioned.

I reiterate my original stance that US Pre-Clearance must be a part of the overall Airport restoration as without it our country will miss a golden opportunity for an economic boost.
Johnson also questioned, “What is the status of the bilateral agreement?”

“Take a look around the region and if we continue on this current trajectory we will lose our hub-function forever along with making a huge error by not advancing US Pre-Clearance. Direct flights to Anguilla and Dominica from the United States of America take away passengers which would have likely connected via our airport,” remarked Johnson. “Has any impact analysis taken place regarding the potential loss of passengers and revenue?”

The various marketing Memorandum of Understandings (MOUs) signed especially with our French-Side Counterparts have been totally ignored it seems for over two years. “Since 2019, we have apparently moved away from a vision of one island, one people, one marketing approach, and the unifying of all stakeholders in tourism. It is obvious without a vision, a well-executed marketing plan and our airport lagging behind our competitors create a formula for harder economic challenges ahead,” Johnson added.
During my tenure as former TEATT Minister, an economic impact study was done by the Central Bank of Curacao and St. Maarten (CBCS) on February 25, 2019, which it highly recommended Pre-Clearance as it advised that it would help to increase US Visitor arrivals to Pre-Hurricane Irma numbers.

The report also mentioned the Improved security and strengthened relations, Improved travel experience for passengers, Improved operations for carriers and airports, Spin-Off Benefits such as Increased spending in host country, Increased Foreign Direct Investments, and Increased tourism.
On August 19th, 2019, Johnson as former Minister of TEATT submitted correspondence and documentation to the Council of Ministers (COM) relating to the US Pre-Clearance Facility at PJIAE NV which included associated cost. Johnson queried, “In the past two years has the Parliament of St. Maarten held any Public Meeting, Central Committee, TEATT Committee, or any meeting at all about US Pre-Clearance?”
Pre-Clearance refers to a process in which Customs, Immigration and other border functions of a foreign country (e.g. United States) take place within the host country (e.g. St. Maarten). This potentially can provide economic and social benefits for governments, users, and carriers. St. Maarten embarked on a mission to attract US Pre-Clearance to the island first in 2012 and later in 2015 when the Council of Ministers formally submitted an Application of Interest to the U.S. Department of Homeland Security.