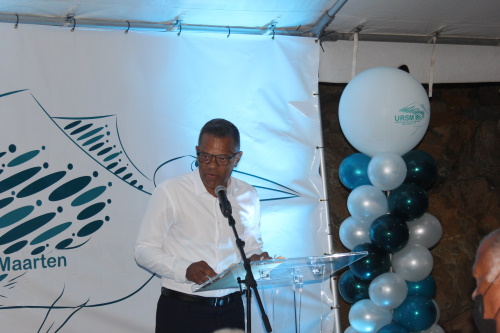 ~Politicians have been enriching themselves through Government-owned companies--- URSM Leader  Dr. Luc Mercelina.~

PHILIPSBURG:--- The Unified Resilient St. Maarten Movement ( URSM- You are St. Maarten) officially launched the newest political movement on St. Maarten’s Constitutional Day. Its leader Dr. Luc Mercelina is no stranger to St. Maarten’s Politics, as he just recently resigned from the United Peoples Party (UPP) where he ran on their slate as the number two candidate in January 2020.
The URSM was officially registered as an Association on Constitutional Day (10/10/2021 at Mingo’s Notary while the inauguration ceremony was held in Cole Bay.

President of the Board of URSM Attorney at Law Brenda Brooks told the small gathering that it was time that the people of St. Maarten walk down another street as they seek to change the political pattern on St. Maarten. Brooks said the party leader Dr. Luc Mercelina decided to follow his conviction and when he answered the call to form a new movement that will bring about change in the political arena on St. Maarten.

Brooks said that the members and those supporting the URSM are just like everyone else that is sick and tired of following the same ole, thus they have decided to bring about the much-needed change that the people of this country are longing for. The URSM President said that after eleven years of becoming a country within the Kingdom St. Maarten has had 9 governments which for them is a perpetual cycle with the same people and same results.

Brooks lamented that the parliament of St. Maarten has become the latest reality show where the actions of some have desecrated, dishonored, and disrespected the floor of parliament. Thus, she said that it is time that the people walk down another street if not there will be no change. The intention of URSM is to bring back pride within the community of St. Maarten by having qualified and well-versed representation in parliament where the necessary legislation will be adopted. Revamping the economy, the education system by providing much-needed capacity programs and meaningful communication with its people.

Party Leader Dr. Luc Mercelina said he is a leader with a backbone and has guaranteed change by revamping the social-economic status of St. Maarten and will ensure that government-owned companies such as GEBE, Harbor Group of Companies, BTP, and the Airport are not used to enrich politicians.
Mercelina said over the years these government-owned companies are used as the cash cow for politicians as such his political party will change that trend.
Another concern for the new movement is the high illiteracy rate in St. Maarten, as there are more than 6% of the people of St. Maarten cannot read while 50% of its people did not attend high school.

Mercelina further states that St. Maarten has between 20,000 to 50,000 of its inhabitants and while the URSM is the party of inclusion the legal status of the undocumented cannot go unnoticed.
Members of the board of the newly established political movement are:
President Attorney at Law Brenda Brooks
Secretary Veronica Jensen Webster
Treasurer Colomarino Hennis
Board Members Stuart Johnson and Josianne Artsen Fleming.
The movement also established an Advisory Council with five members they are:
Rene Richardson, Ralph Richardson, Johan Janchi Leonard, Ettiene Locardia, Eddy Jacobs.
Member of the Advisory Council Rene Richardson said in his speech that they are in this together as they aim not to exclude anyone as they are united in the interest of everyone.
Richardson put the bed the rumors that have begun on the island claiming that the URSM is a shadow of another political party. He also made clear that they will not kick off by criticizing any other political party. He said that St. Maarten has a long way to go simply because the country is simply off track.