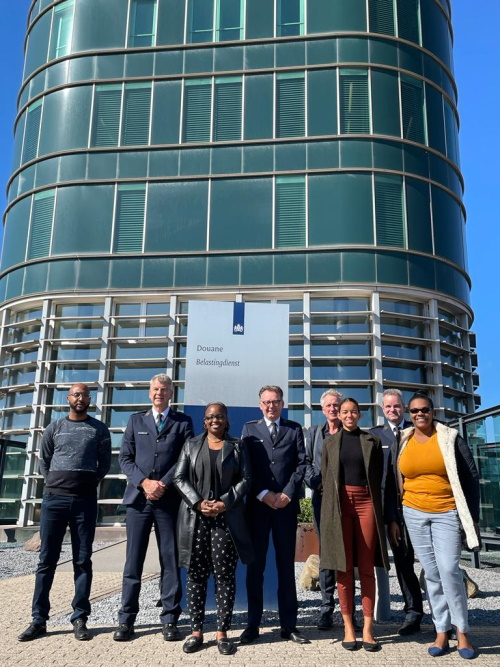 PHILIPSBURG:--- On Friday, September 23, 2021, Minister Richardson had an introductory meeting with the acting director of Enforcement policy and International policy at Dutch Customs Mrs. Irene Uitermark, and Dutch Customs’ strategic Policy Advisor International Affairs Mr. Bert De Haas at the Head of Office of the Customs Administration in the city of Rotterdam.

Dutch Customs has been assisting Sint Maarten’s Customs since 2018 as part of the mutual agreement on strengthening Sint Maarten’s borders. Minister Richardson thanked acting director Mrs. Uitermark for Dutch Customs’ assistance to Sint Maarten and informed the director of the areas where she would like to see increased cooperation. “Sharing an island with an open border poses certain challenges for the country,” said Minister Richardson. “I would like to see our Customs organization become better equipped at identifying these challenges and dealing with them in a more efficient way. For example, we know that Sint Maarten has a large market for counterfeit items of, especially high-end brands. When our laws to combat the illegal sale of counterfeit items are not properly enforced it negatively affects Sint Maarten’s reputation internationally as the quality of all our goods is called into question.”
Mrs. Uitermark shared that counterfeit items are also an issue in the Netherlands, and that investigations have shown that oftentimes the counterfeit market is closely linked to criminal activity.

Minister Richardson also conveyed her wish to see increased cooperation in the areas of education and training of Customs officers on Sint Maarten to further professionalize and strengthen the organization. The willingness to assist in these areas was communicated to Minister Richardson and she was informed that special focus will be given to this topic under the new protocol for border protection.

In the Netherlands, Customs falls under the Ministry of Finance and it does not enforce rules on criminal cases. Instead, for criminal cases, there is a close working relationship between Customs and the Royal Netherlands Marechaussee. Often times the information that Customs obtains from its operations is quite valuable for criminal cases. Dutch Customs acting director Mrs. Uitermark emphasized the importance of close cooperation and the exchange of information between partners in the chain.

After the introductory meeting with the acting director of the Enforcement Policy and International policy at Dutch Customs Mrs. Irene Uitermark, Minister Richardson and her delegation traveled to the Port of Rotterdam at the ‘Maasvlakte II’ which encompasses the largest freight port of the European Union. At the Port of Rotterdam, Minister Richardson was met by Regional Director of Customs Jan Kamp and his colleagues and received a presentation on Customs’ operations. The Minister was also given a tour of the Customs facility and practical training grounds where custom officers can train in a simulated ship environment to become more familiar with real-life scenarios that they may encounter.

Impressive was the term used by Minister Richardson to describe the large-scale and highly efficient operation that is managed by Dutch Customs to handle the flow of goods.

After visiting Customs, Minister Richardson traveled to Schiphol airport where she was received by Royal Marechaussee coordinator Schiphol colonel Elwin van der Molen. He gave a short introduction about the task of the Royal Netherlands Marechaussee and its operations at Schiphol airport. The presentation was followed by an extensive tour of the operations in the field, where the Minister was given the opportunity to utilize a KIOSK, identify a fraudulent document and learn about the functionalities of the various departments within the Royal Netherlands Marechaussee from persons working in the field.

Seeing the wide scope of the border operation carried out by the Royal Netherlands Marechaussee was an important aspect of Minister Richardson’s work visit. The Minister was given extensive information which she intends to utilize to strengthen Sint Maarten’s immigration organization. At the end of the tour, the Minister was presented with commemorative gifts from the KMAR for which she expressed her thanks. She also thanked Colonel Van Der Molen and his colleagues for their warm welcome and their committed dedication to continuing to assist Sint Maarten.

The day was concluded with a meet and greet discussion with young Sint Maarten professionals and students in the Netherlands which was coordinated through the office of the honorable Minister of Plenipotentiary, René Violenus, and his Cabinet. Members of United Sint Maarten Connection (USC) and Unleashed Potential Group (UPG), both foundations that cater to and create a space for Sint Maarteners in the Netherlands, were also present during the meet and greet. The conversation was a very positive one with too little time available, as such it was agreed that a virtual continuation will be planned.