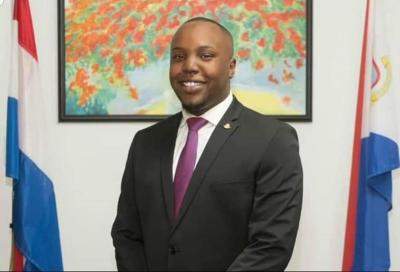 PHILIPSBURG:--- Minister of VROMI Egbert Jurendy Doran said in his brief response to parliament that the 54 persons that received draft decree in 2014 from former Ministers of VROMI were plain out fooled or duped. Doran showed a draft decree that lacked basic information while laying out the steps that have to be taken before a decree is issued. He described the 2006 allotment as bare confusion.
The Minister said that since placing the advertisements in the media he has been receiving documents from people that are supposed to be internal documents such as advice that has been signed by former Ministers. He said that the land distribution that took place in 2014 basically duped people because the government did not even own the land at Vineyard Heights at the time. He said the ministry has two lists one of which is handwritten, while the other is typed however, they do not match.
Doran said that he believes in continuity however he will not continue anything that was not done according to the procedures. He said the ministry does not have the so-called ‘blue map”.
Doran said he was in college in 2014 and yet persons who worked at the Ministry of VROMI or were in government are asking him questions regarding what transpired in the past. He described the meeting of parliament on Thursday as a learning experience as he gained much information. The Minister called on the members of parliament that have the information to pass it on to him and hopefully they will cooperate when contacted by his ministry.
Doran said his intentions are pure and he too like everyone wants to fix the issues faced with the Vineyard Heights land allotment. He said quite often Ministers today are confronted with issues with the past.
Doran gave parliament a breakdown of the lots available at Vineyard Heights. He said there are 98 of which 14 duplexes, and 25 lots for homes. The project he said will house 176 families in total with 125 residential units.
The meeting is scheduled to continue at a later date.