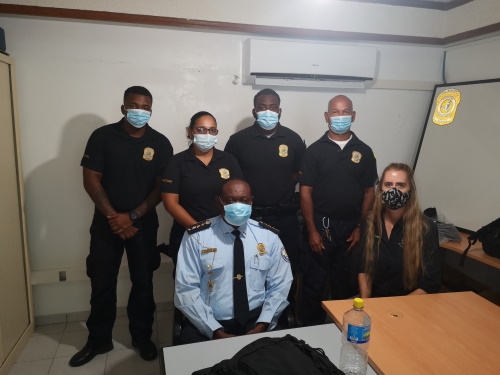 PHILIPSBURG:--- In the last weeks, the Nature Foundation St. Maarten has actively collaborated with the officers of St. Maarten Customs to exchange knowledge regarding the trade of endangered species, called CITES Convention (the Convention on International Trade in Endangered Species of Wild Fauna and Flora). Customs Officers learned more about which species are protected under the convention, especially species occurring on St. Maarten, and details of the required permits from a biological viewpoint. Knowledge was shared about occurring concerns and issues and how the Foundation can assist officers to recognize the different endangered species.

“Collaboration is crucial to ensure the survival of endangered species and to adhere to our local and international legislations. St. Maarten customs officers are on the front line to intercept illegal wildlife trade; however, species recognition can be very challenging. We hope that our local species knowledge contributes to improving the CITES implementation on St. Maarten” stated Melanie Meijer zu Schlochtern Manager at the Nature Foundation St. Maarten.

Chief of Customs, Mr. Anthony Doran continued; “First of all, the Customs Department would like to thank the Nature Foundation for taking the time out to exchange knowledge to the personnel of the Customs department over the past weeks. Our officers now have a better understanding of the trade-in Endangered Species of Wild Flora and Fauna. Especially species occurring on St. Maarten. In close collaboration with the Nature Foundation, Customs will continue to ensure that all species listed on the CITES upon import and export are controlled once the proper documentation can be presented.”

In order to trade species listed on CITES between different countries, appropriate CITES import and export permits are required and those documents need to be presented for clearance at the port of entry and exit. Examples of species listed on CITES are sea turtles, dolphins and whales, all parrots (cockatoos, parakeets, and macaws), all corals, all cacti, all orchids, all primates, lignum vitae tree, some sharks (such as whale sharks and hammerheads), iguanas, seahorses, hummingbirds, tortoise (land turtle), all boa and python snakes, all alligators, crocodiles and caimans and some bats. If these species in any state, either dead, alive, parts (such as shells or feathers) of or samples of these species, are traveling from or to other countries, CITES permits need to be requested by the CITES Management Authority of the involved States. The Nature Foundation is the designated CITES Management Authority of Sint Maarten and issues CITES permits for the country, appointed by the VROMI Minister via a Ministerial Administrative Decision.

CITES is the Convention on International Trade in Endangered Species of Wild Fauna and Flora, which is an international agreement between governments. Its aim is to ensure that international trade in specimens of wild animals and plants does not threaten their survival. St. Maarten is a part of the convention based on the national legislation and the nature ordinance, CITES is legally binding on the parties. In total, more than 38,700 species, including roughly 5,950 species of animals and 32,800 species of plants, are protected by CITES against over-exploitation through international trade. The species covered by CITES are listed in three Appendices, according to the degree of protection they need.

Appendix I includes species threatened with extinction. Trade-in specimens of these species is permitted only in exceptional circumstances. Appendix II includes species not necessarily threatened with extinction, but in which trade must be controlled in order to avoid utilization incompatible with their survival. Appendix III contains species that are protected in at least one country, which has asked other CITES Parties for assistance in controlling the trade.

Each Party to the CITES Convention must designate a Management Authority in charge of administering that licensing system and a Scientific Authority to advise them on the effects of trade on the status of the species. Within the Nature Foundation the Manager, currently Melanie Meijer zu Schlochtern, is the appointed CITES Management Authority and the Secretary of the board, currently Rikke Bachmann-Speetjens the Scientific Authority.

CITES attempts to address exploitation via the international wildlife trade, which is hugely lucrative for both dead and live organisms. The United Nations estimates that the illegal trade is worth between $7 billion and $23 billion a year. While the wildlife trade is devastating for ecosystems and species, it also harms local economies, societal stability, and human health. The trade is diverse, ranging from live animals and plants to a vast array of wildlife products derived from them, including food products, exotic leather goods, wooden musical instruments, timber, tourist curios, and medicines. (source CITES.org).

For any questions related to CITES or to receive information if a certain species are protected under the convention, please reach out to the Nature Foundation St. Maarten, more information can also be found at naturefoundationsxm.org/cites.