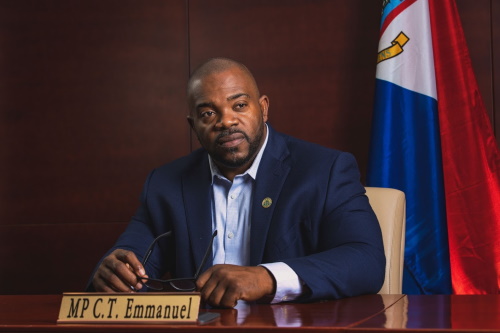 PHILIPSBURG:--- Independent Member of Parliament Christophe Emmanuel on Sunday said the Minister of Finance Ardwell Irion proved once again that the financial information he shares with the Parliament and the people of St. Maarten cannot be trusted. “The misinformation and hiding of the truth continue,” MP Emmanuel said.
The MP was referring to the disclosure by Minister Irion that a 7.5% sales tax for online purchases is on the table as part of the government’s tax reform plans. He pointed out that the Minister first announced this 7.5% figure on August 30 during the initial meeting on tax reform in Parliament.
At that time, Emmanuel said, the Minister chose to purposely mislead us about that tax, sensing that it would cause uproar on the island. The Minister in that meeting described the 7.5% as: “(verbatim) The introduction of a 7.5% retail sales tax on purchases from foreign suppliers direct to St. Maarten consumers.”
“No mention that it was an online tax. The Minister was hoping nobody picked up on that, but I immediately asked him what that statement meant. He purposely tried to use word-play to hide the true nature of the tax, which is to tax online purchases,” MP Emmanuel explained.
He continued: “These are the tricks that have become the norm for this Finance Minister and the entire government. Remember this is the same Finance Minister who presented the financial status of the country on half a sheet of paper. He also told the people that the country's finances were not bad, only to say a few days later that we were almost bankrupt. We can never get the truth from this government.”
The MP stressed that as a result of the Minister’s attempted trickery, the public, as well as Parliament, should take any other tax reform information presented by the Minister with a grain of salt, in particular information about a VAT tax and land/real estate tax. “The Parliament of St. Maarten and the general public must be vigilant when it comes to this government and tax reform. Their track record of presenting misleading information as well as fulfilling an apparent agenda from The Hague, should have us very concerned,” Emmanuel said.
Regarding the 7.5% sales tax on online purchases, Emmanuel asked the Minister a few questions after his disclosure: How did you arrive at the 7.5%? Does this include everything that is purchased online? How and at what point in the sale will this tax be applied? How will it be collected? Does this mean that the consumer will be taxed twice having already paid state taxes online? Will there be a value threshold for being taxed? How will local courier and shipping businesses be affected who employ local people? How will entrepreneurs who order their products online be affected? What happens if someone calls on the landline to place the order from overseas?