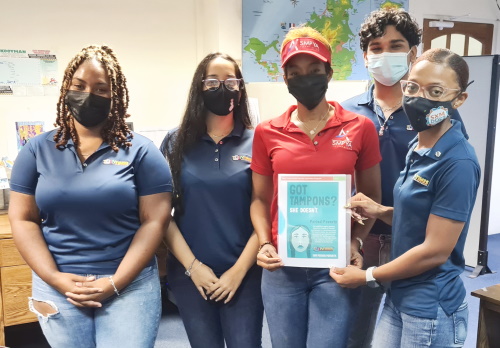 PHILIPSBURG:--- The young writers of Teen Times have submitted a proposal for legislation that would mandate schools and other public spaces to provide free female sanitary products. The proposal follows a global movement to end what is known as “Period Poverty” and is Teen Times’ second legislation proposal presented this year to Parliament through a Member of Parliament.

Coordinator of Teen Times Nichele Abreu-Smith presented the document on behalf of her group to MP Angelique Romou who is the Chairlady of Parliament’s Committee for Youth, Education, Culture and Sports. “We recognize that this issue might fall under the committee of health, but we trust that MP Romou, who has a proven record of caring about the wellbeing of young people and young women, can guide it for discussion through the proper channels,” Abreu-Smith said.

Period poverty is defined as inadequate access to menstrual hygiene tools and education, including but not limited to sanitary products. It is well established that meeting one’s basic needs—food, water, shelter—is the necessary foundation for health and well-being. Menstrual hygiene is also considered a basic need. “By addressing period poverty head on, one day, when a student asks for help, we may be able to offer a concrete solution. And perhaps, one day, our students may not even need to ask at all,” Abreu-Smith said.

Teen Times outlines in its proposal that when menstruators resort to unhygienic alternatives, they are vulnerable to harmful physical and mental outcomes. Products like rags, paper towels, and reused pads put menstruators at a heightened risk for urogenital infections, such as urinary tract infections and bacterial vaginosis. These products are also associated with outcomes such a skin irritation, vaginal itching, and white or green discharge. Further, the emotional toll accompanying lack of access is related to poor mental health outcomes, such as elevated anxiety and depression.

“Period poverty especially prevents low-income menstruators from bleeding with dignity. The reason this public health crisis is yet to be addressed is largely due to stigma. Stigma associates menstruation with uncleanliness and disgust instead of recognizing it as biologically healthy and normal. The shame associated with periods prevents people from talking about it, which in turn avert dialogues about access to products and even the ingredients in pads and tampons,” Abreu-Smith said.

“While period poverty is the focus, period stigma has also been highlighted as a key issue, particularly for young girls. Research have shown that a large percentage girls aged 14-21 are embarrassed by their periods, while even more admitted that they have felt embarrassed buying sanitary products. The impact of periods on education is also an area for concern. Our research found that 49% of girls have missed an entire day of school because of their period and lack of enough products at that moment,” Abreu-Smith said.

She added that besides the immediate priority of the schools, the legislation could also establish a right for everyone in St. Maarten who needs to use period products to be able to obtain them free of charge. The proposal states that there are several global examples that the Parliament of St. Maarten can follow. They set out the key requirements for a universal period products scheme in order to make this right effective. This is in effect a framework provision, with much of the detail to be set out by the government in regulations at a later date.

MP Romou congratulated the group on its initiative and assured them that she will table the proposal in the next scheduled meeting of the committee and thereafter push it while it is at the executive level as well. She said the issue of Period Poverty has been on her radar since she also has conversations with young omen about not being ashamed of their period, which is a natural cleansing process.

The “Period Poverty” legislation proposal is Teen Times’ second legislation proposal presented this year to Parliament through a Member of Parliament, the first being the proposal to include substantive St. Maarten history in the school curriculum. This proposal was presented to the Party for Progress faction whose faction leader Melissa Gumbs have already booked it for handling in MP Romou’s committee. It should be noted that Teen Times also recently re-submitted its 2013 report on Youth Delinquency to the Ministry of Justice to be included in the recent symposium on the same subject.