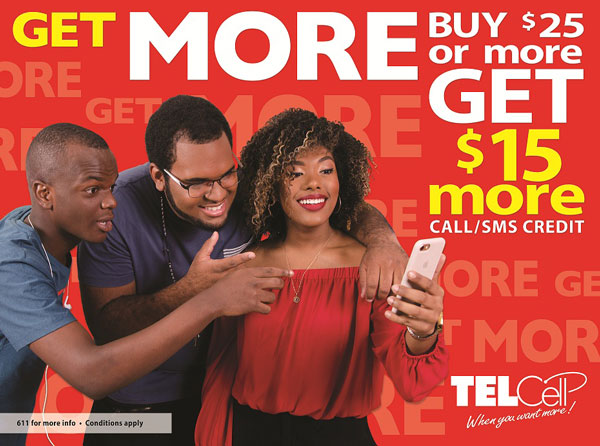 Pond Island:--- Favourite mobile provider, TelCell, welcomed in the month of March on Wednesday with an exciting new “GET MORE” campaign, offering $15 call and SMS credits to TelCell mobile and TelEm landlines.
Late last year TelCell announced the end of it’s popular “More” campaign on January 31 this year, but promised to introduce another one for its loyal customers.

The mobile provider says it has made good on that promise by giving $15extra credit to customers who Top-Up for $25 in a calendar month.

“With the previous campaign, customers could Top-Up for one amount and immediately get the extra credits depending on the amount that they topped up with. In the new campaign, customers don’t have to Top-Up all at once to get their credit. Once they have Topped-Up to $25 in one calendar month, they will automatically get a $15 extra credit added to their “TC Balance”,” explained Manager, Marketing & Sales, Grisha Marten.

She says under the new campaign, customers can Top-Up $5 today, $10 next week and so on until they reach or pass the $25 amount to qualify for the extra credit, but stressed that they must also do so within one calendar month if they are to receive the bonus credit.

“We are launching the campaign March 1, and will continue with the offer for three months on a trial run until May 31,” continued Ms. Marten.

She said with the ending of the “More” campaign in January, many TelCell customers were disappointed and requested an alternative to make their mobile calling and SMS texting more affordable.

“We have come up with the new “GET MORE” promotion that rewards loyal TelCell customers and gives them $15 extra each month to bring a smile on their face and a little extra in their pockets. It is a great promotion for those who find it a little touch each month to keep up with their calls and texts,” added Ms. Marten.

“The great thing is that our customers can accumulate their $25 qualifying amount at their leisure and still be able to take advantage of the special promotional balance and extra credit,” Ms. Marten added.