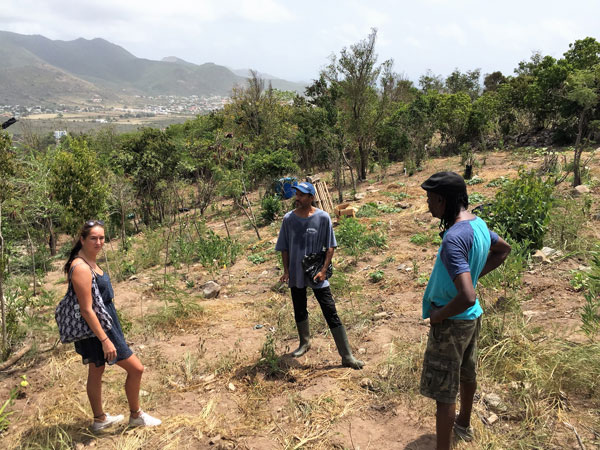 PHILIPSBURG:--- On Wednesday Nature Foundation Researcher Sanne Collee and Nature Foundation Manager Tadzio Bervoets met with Agricultural Experts Mario Beauperthuy and Jocelyn Richardson to discuss the issues faced by the agricultural sector being impacted by the invasive monkey population. The two experts mentioned that in the past some USD10,000 dollars was lost due to Monkeys damaging their crops.

The St. Maarten Nature Foundation has decided to conduct an online survey on the socioeconomic influence of the invasive Green Vervet monkey population on the Island in order to gauge the general impacts the species is having.

The questionnaire is posted online and anyone affected by the monkeys and/or everyone who has an opinion on what should be done about the invasive monkey population is asked to fill it out.

The survey can be found under the following link:
http://surveymonkey.com/r/monkeyresearch

The survey asks for age and gender to assist in building a sample and to give an insight in which audience we are dealing with. The questions about income and occupation are to understand which layers of society are affected most when looking at social and especially economic damage. When more vulnerable groups experience a lot of impairment, finding solutions might have a higher urgency.

The final data that derives from these questionnaires is used to perform several analyses, which should give an insight in the scale of affected stakeholders and their geographical location; the severity of the social and economic damage inflicted by the monkeys and the most preferred methods of control filled out by the participants.