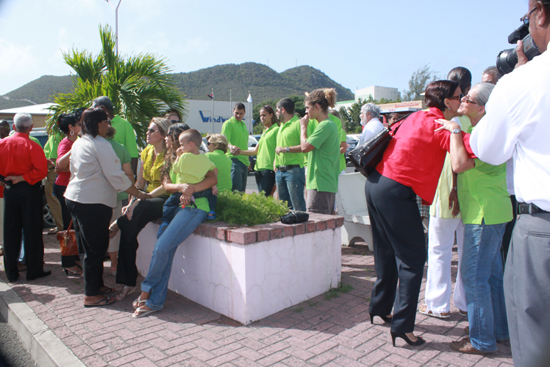 Philipsburg: --- Leader of the People’s Progressive Party Gracita Arrindell has captured the attention of all major political players who are gearing up for next year’s country election. According to reliable sources, Arrindell already met with the leader of the Democratic Party Sarah Wescot Williams who invited her on both occasions to discuss the possibility of merging the two parties together.

The source said Arrindell already indicated to Wescot Williams that even though she met with her as a politician who is always ready to listen; her party members were not interested in joining with the Democratic Party. The source said that even though Arrindell met Wescot Williams she herself is not interested in being part of the same group who treated her miserably over the past years, especially after the 2007 island council elections.

Arrindell also met with Commissioner Theo Heyliger once as he too is trying to pull Arrindell in his corner to form his new party now that he has stepped away from the Democratic Party. It is said that even though Arrindell met with Heyliger her intention is for Heyliger to join the PPA since the party is already established and registered on the island territory of St. Maarten, while Heyliger does not even have a name for his new party. It is understood that the two is expected to meet again but Heyliger has no intention to join any other political parties but to form his own.

Asked about this possibility on Friday where it was clear that the members of the Wathey family and supporters of Theo Heyliger decked out in their green colored shirt to lay the wreath at the statue of the late Claude Wathey. Heyliger said he is speaking with everyone and all potential candidates since the island is already small. Heyliger said the idea is to put St. Maarten first. Heyliger said in the new setting they would need fifteen members for the parliament who cannot have dual functionality. He said no one can hold a position as a Minister and a parliamentarian. Heyliger said there would be 22 positions available and it is very important for them to have people on board that have St. Maarten at heart.

Even though not saying if he is also negotiating with members from the National Alliance and the Democratic Party to join him Heyliger said he being the commissioner of public works has issued a number of building permits and he started off with a foundation and is now adding floors. The commissioner said that whatever decisions are taken by him would fit within the building codes of the island. 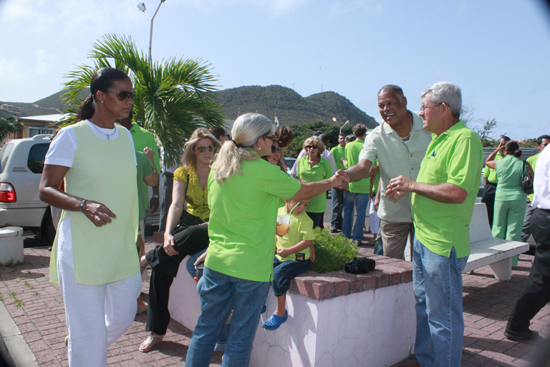 Asked if he began campaigning on Friday for his new party the commissioner said campaign starts the day after the last election, which means he has been campaigning a long time ago. Asked when he would officially launch his new party Heyliger said the process is ongoing, since he has been seeking advice from the people. As for the name of the party he said they already selected the top five names that was submitted but a final decision has not been taken on what name the party would have.

SMN News understands that the number two candidate on the PPA list during the 2007 island council election Johan Janchi Leonard was also approached by Heyliger and he has agreed to be part of Heyliger’s list. So far, none of the players negotiating with each other is not ready to talk instead, they are busy working behind the scenes.

SMN News was also reliably informed that Arrindell also spoke to leader of the National Alliance William Marlin but no decision has been taken. It is said Arrindell is trying to make sure Marlin lives up to the court’s decision and places her back in the island secretariat. The source said that is the main bargaining point for Arrindell with the National Alliance is her position in government. In last weeks press briefing Marlin acknowledged that his government intends to live up to, the court’s ruling and that they are working on a proposal for Arrindell relating to her job as a civil servant.

Also visible on Friday in front of the Government Administration building were the members and supporters of the Democratic Party that also dressed in red tee shirts. It was indeed as show of colors for the annual event. At the ceremony was the French Quarter scouts led by Georgina Ruan all decked out in their red tee shirts, the scouts also took time off to take photos with the board members of the Democratic Party board.