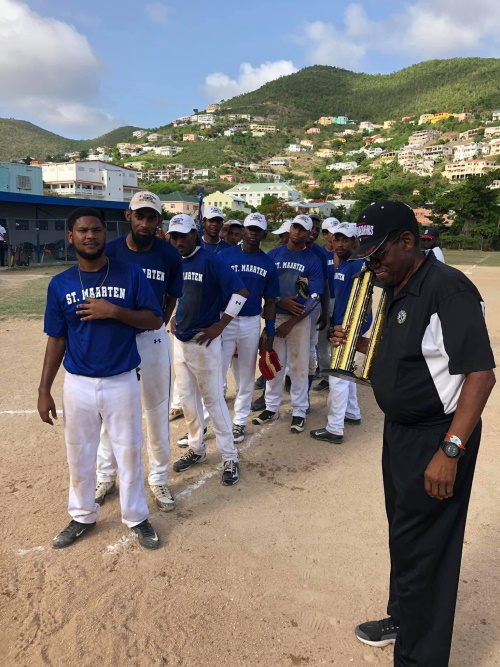 PHILIPSBURG:--- The Rafel Skeete Caribbean Baseball Invitational (RSCBI) is taking place here this weekend, June 25 – 27, at the Little League Stadium on Soualiga Road.
The well-known St. Martin veteran baseball player Rafel Skeete is on the island with his team from the USA. Skeete is a board member of the Piper Davis baseball group in Birmingham, Alabama, USA.
“Rafel has been focusing on Caribbean baseball games, creating a team to work on the local tournament. He also provides a platform for young athletes to showcase their talents in front of US college recruiters and scouts,” said Dr. Rhoda Arrindell of the United Academy (UA) sports organization.
The UA provides “academic support for youngsters and prepares the prospects to meet the academic and other requirements to be accepted into college,” said Dr. Arrindell.
The weekend tournament is open to players 16 – 19 years old; however, each team is permitted to have a maximum of three players above 19, but not older than 22.
On Thursday evening the tournament opens with a welcome and Baseball Hall of Fame ceremony hosted by St. Maarten Tourist Bureau at Taloula Mango’s.
“The Hall of Fame honors persons for their influence on and contribution to the development of baseball on the island. It’s a way to say, ‘thank you for your invaluable contribution over the years,” said Skeete. Two former baseball players will be inducted into the Hall of Fame and two will be recognized for their contribution to the sport.
The games will kick off at 3:30 p.m. on Friday, June 25, and continue Saturday with the final game on Sunday.
The Piper Davis Baseball League was founded in 1992 by Fred Plump in Birmingham, Alabama.
The league was founded to put Little League baseball back into inner-city parks, giving youth an opportunity to express their athletic abilities, as well as to honor all players that played in the historic Negro League, according to Skeete.
The sponsors of this year’s RSCBI tournament are St. Maarten Tourist Bureau, the Department of Sports, Motorworld, Prime, KFC, Costpro, and Carl and Sons, said Dr. Arrindell.
For further information about the tournament or about United Academy, contact Dr. Rhoda Arrindell at (721) 520-1136.