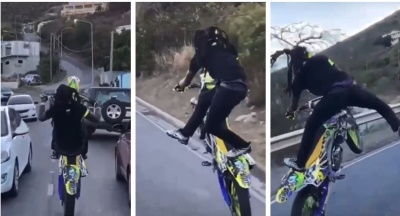 PHILIPSBURG:--- A video of the dangerous behavior of a motorcycle rider has been widely circulated on social media and messaging apps over the last week. Police have secured a copy of the video and while the clip is shot from behind the rider, there is sufficient evidence to prosecute the rider severely. When law enforcement authorities positively identify the rider, he will face the consequences of the law.

The Police Force of Sint Maarten KPSM seeks the assistance of the public to identify a motorcycle rider caught on camera performing dangerous stunts on his motorcycle while meandering in traffic as he climbed Cole Bay Hill via A.J.C. Brouwers Road over the weekend.
The stunts were a danger not only to the law-breaking rider but to other road users who were observing the traffic rules.

If the community of Sint Maarten believes that the actions of this motorcycle rider are also perceived as dangerous, then the police are requesting them to identify the motorcyclist so he can be apprehended and prosecuted.

Identifying the rider is for the safety of all road users, including the rider himself who has displayed utter disregard for his own life and that of fellow road users and their property. The public is urged by KPSM to not support this behavior; think about saving lives and making out roads safer for yourself and others.

In the past few weeks, KPSM has issued several warnings to reckless scooter and motorcycle riders. Consequently, an action plan was drafted and a police action team was formed to counter this dangerous phenomenon. Within a very short time, several scooters were confiscated by the action team. Several motorcyclists and scooter riders were fined during the same period.

Police have once again observed some bikers do not recognize the danger of hopping and doing stunts between moving vehicles. Riders have become more brazen and callous. They seem to get a kick out riding recklessly between other vehicles.

KPSM reminds scooters and motorcyclists that this type of behavior will not be accepted or tolerated and will be dealt with severely. Riders should consider that if stopped by police and their vehicles do not comply with the technical or traffic laws, the possibility exists that the motorcycle or scooter will be confiscated.
Motorcyclists and scooter riders need to be aware that if they do not collect their motorcycles or scooters within a certain period of time set by law, they will be crushed with the consent and in consultation with the Prosecutor's Office.

KPSM will again intensify the controls on scooter riders and motorcyclists seeing that some road users do not respect or obey the traffic regulations and their behavior is a nuisance to the community.
Anyone with information about this dangerous rider or any other plaguing the community, please contact the Police Force: 54-22222 or the emergency number 911.