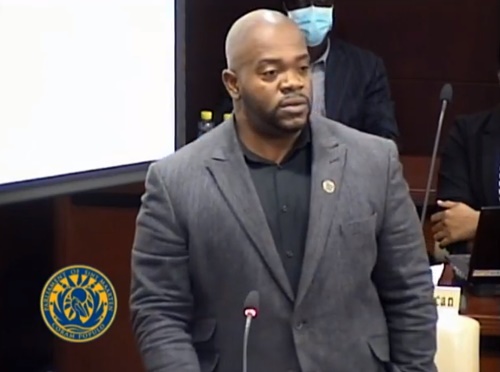 PHILIPSBURG:--- Using airport employees as a political football and for sound-bites is unbecoming, but very typical of the opportunistic method of operations by the governing National Alliance (NA)-United People (UP) coalition. Independent Member of Parliament Christophe Emmanuel over the weekend said he was astonished to hear the Prime Minister and the President of Parliament mention the airport employees in Parliament last Thursday, in what he says was a transparent ploy at playing politics with people’s emotions and lives.
He said during months of an outcry by the employees over disrespectful treatment by the CEO of the airport and multiple questions surrounding outstanding money owed to them as well as the working environment at PJIA, “not once did members of the coalition come out in support of the employees or offer any kind of explanations to them. They did not care,” Emmanuel said.
According to the MP, the PM and President of Parliament strategically mentioned the employees in Parliament because they heard live on radio that the employees might be moving towards industrial action. “It was a slick attempt to diffuse the employees and it was concocted right there in Parliament at a moment’s notice. But the thing with cheap attempts to appease, is that you can see right through them, and the airport employees should not fall for it,” MP Emmanuel added.
He pointed out that the government of St. Maarten could care less about the employees as was evidenced through their months-long silence and acceptance of letting the CEO pillage the company at the expense of the employees.
“When I disclosed the amount of waste and spending at the airport the coalition went in press briefings and said I was fear-mongering. When I disclosed that over US $10 million was spent by PJIA to cover high consultant costs from Schiphol Airport, MP’s from the coalition said we need to keep focused on what is important. When the employees came to Parliament, the Minister of TEATT, CEO, and CFO of the airport and coalition MPs left without talking to them. Not one of them saw the employees as important. But now that the employees are fed up, now they are important to this government,” MP Emmanuel said.
The MP added that the government, which is also shareholder representative of the airport, has yet to publicly indicate what they will do if anything regarding the spending splurge by the CEO of the airport even after he has publicly asked for an investigation three times. “They can choose not to answer me, but if you so care about the employees who simply want honest answers and concrete solutions, you would at least address what they care about and not just use them as a sound-bite,” he said.
He said the casual explanation from the CEO that almost Naf 300,000 charged to airport credit cards are company expenses is a farce, and charging the cards for around US $25,000 in food alone, both on-island and abroad is highway robbery. “If PJIA can allow its CEO to spend that amount of money on himself and call all of it company expenses, then the entire board and CFO needs to be replaced and an in-depth investigation must be conducted at PJIA.
“If the CEO alone can rack that up, imagine what the total could be when you include everyone else with a corporate credit card. We could be talking into the millions if the same laissez-faire approach is applied. In the meantime, while everyone is living high on the hog, the employees continue to get the same song-and-dance story about money. I say no, impossible. Replace the CFO with the local counterpart and clean up the mess and take care of your most valuable asset at PJIA, the people,” MP Emmanuel said.
He continued: “The Prime Minister has shown that she can reach out and get information from airport management since she had the Project Director of PJIA on her radio program this weekend. If you have the drive to contact middle management at PJIA to fill a radio spot, then calling on the board and upper management as PM and shareholder representative, to finally provide answers to the airport employees and their union.