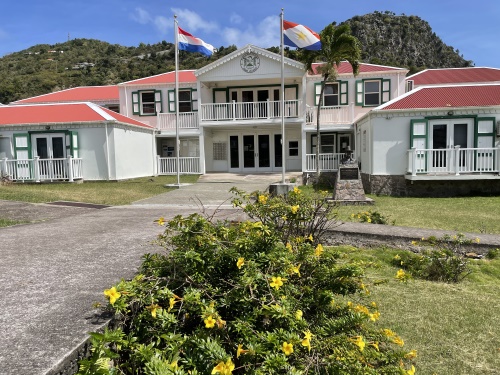 SABA:--- The renovation will start of the Government Administration Building in The Bottom is scheduled to start in late May. The public will be informed as to how this will affect public services.

The long-discussed upgrade of the courtroom was tabled and the Island Council has requested the Executive Council to make haste with this project as it is important that the people can easily follow the meetings of the Island Council.

The Public Entity Saba has a new website, www.sabagov.nl, where all publications of government will be available, including press releases, notices, and vacancies. Training and education of civil servants are ongoing. A new education plan will include opportunities for civil servants who want to further their education. The Saba Reach Foundation will be involved and execute parts of the education plan.

Discussions on the themes such as the workweek, vacancies, job evaluations, function house, and salary table, an organization ordinance, (proactive) communications, and the governing accord in the Netherlands were also discussed and will require further deliberations. The latter was mentioned as presently the Netherlands is preparing such an accord. The Island Council deemed it necessary to make all efforts to get Saba’s needs and wishes in the agenda of The Hague and to have these included in the Dutch governing accord where possible.

The new Youth Policy Plan was presented to the Island Council during the retreat. The plan seeks to outline the obligations of the Public Entity Saba, the Dutch Government, various stakeholders, families, and young people themselves. The policy is both an acknowledgment of the specific needs of young people and formal recognition of their potential and unique contribution for further development. The Culture Policy Plan is also ready and was submitted to the Island Council in April. A new traffic ordinance is being drafted, which will be discussed during a town hall meeting. A new first draft of the Saba Development Plan is being worked on and will be ready for input by the Island Council in June.