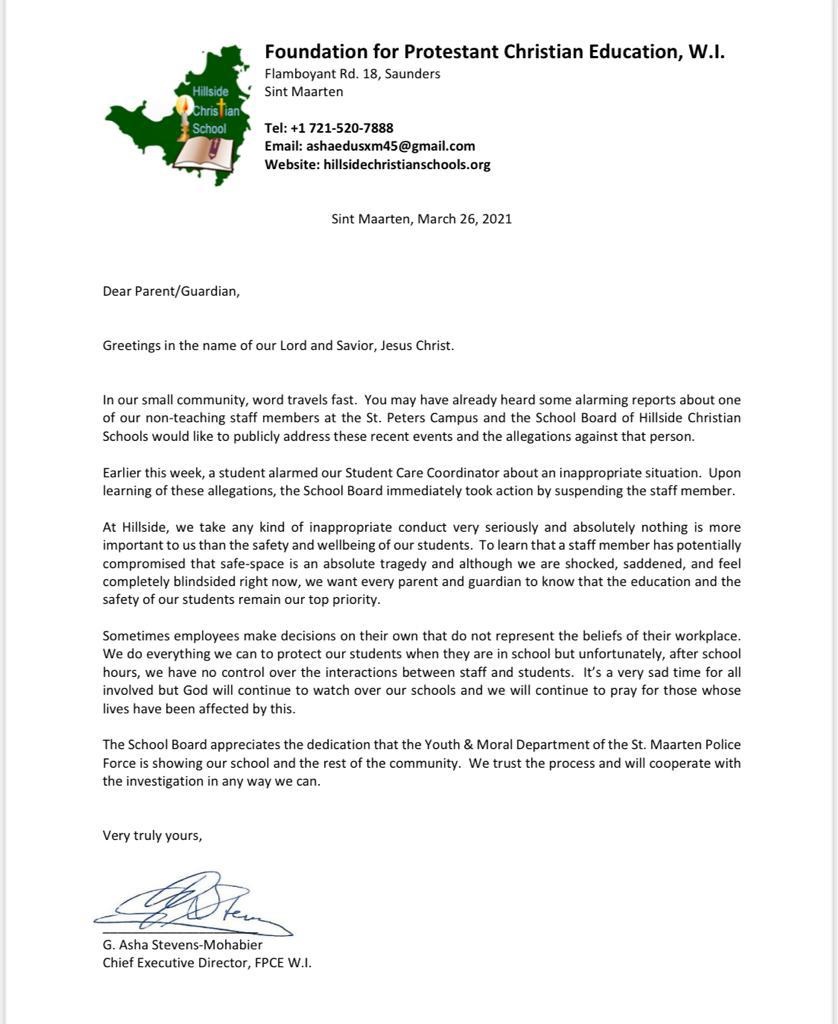 PHILIPSBURG: --- Detectives from the Juvenile department of the Police Force of St. Maarten along with the Prosecutor's Office arrested two persons on Wednesday morning, Police searched the homes in the Belvedere/ Dutch Quarter area.
One of those suspects is a non-teaching staff of the Helmich Snijders (Hillside Christian School) and her neighbor after complaints were filed against them for sexually abusing two students that were taking afternoon classes at the home of the non-teaching staff. The non-teaching staff of the school has been identified as Joy Walters the secretary, while the second suspect has been identified as Bernard Eugene Stroud, an employee of UTS. SMN News learned that the school employee is also the mother of his child.
On March 26th, 2021, the school dispatched a letter to all parents and guardians informing them of the unfortunate incident that involves one or more of their students.
SMN News has been reliably informed that at least two students came forward last week which sparked an investigation, and a complaint was filed with KPSM.
On Wednesday morning the Police and Prosecution arrested the two suspects that were accused while their homes were searched.

Complaints about sexual abuse against minors involving an elementary school employee and her neighbor led to their arrests early today, Wednesday, April 7, 2021, by the Juvenile Department of the Police KPSM on the order of the Prosecutor’s Office OM SXM.

The houses of the two suspects were searched as part of the ongoing “Pandora” investigation that is also looking into child pornography. A firearm and a quantity of marijuana were found and confiscated from one of the houses. Data carriers were confiscated from both houses.

The investigation is ongoing and the suspects - J.D.W. and B.E.H.S. remain in police custody.

One of the suspects is a (suspended) school employee who targeted her victims at school. The (alleged) abuse later took place when the victims attended after-school tutoring at the suspect’s home.

The abuse of the minors took place at the homes of the suspects over prolonged periods of time starting from around 2010. The time span of the abuse differs based on each victim’s contact with the arrestees. In the case of one victim, the abuse occurred on the premise of an elementary school. The abuse of another victim took place in 2019 and during the 2020 lockdown when the child was at tutoring classes at the home of one of the arrestees.

Aside from complaints of sexual abuse, one complainant stated that photographs of the victim(s) were taken by the school employee and shared with the second arrestee, who is her neighbor.

All of the victims in this case are/were below the age of 13 at the time they were abused by the suspects.

Cases involving the sexual abuse of minors are considered as heinous by OM SXM and KPSM as they target the most vulnerable in the community – children.

OM SXM and KPSM are cognizant that cases like this are very emotional ones and urges parents and guardians not to let emotions guide actions. The police and OM SXM are working diligently on tackling such cases for the safety of the community and in particular our children.

OM SXM and KPSM encourage everyone in the community to be mindful of the welfare of all children and to report any and all instances of sexual abuse whether against minors or adults. To report (sexual) abuse, call KPSM on + 1 721 554-2222, extension 501.