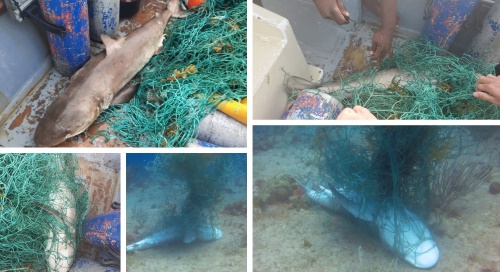 PHILIPSBURG:--- The Nature Foundation St. Maarten received a call to report a dead Caribbean Reef Shark (Carcharhinus perezi) tangled in a net within the Man of War Shoal Marine Protected Area in the beginning of July. The foundation crew was able to locate the shark on one of the dive sites and retrieve the body. After bringing the shark to the surface the staff was able to untangle the net and take the measurements of the animal and then give it a proper burial at sea.

Later that week a Sandbar Shark (Carcharhinus plumbeus) was also spotted beached on Cupecoy Beach. This was a unique experience as the Sandbar species is a very rare shark to be spotted in this area, and this is the first time in the foundation recording that one was found on St. Maarten. A large thanks go to a helpful resident which assisted the shark to find its way back to the ocean and understood that sharks are not to be irrational feared.

While these two events are not related, they do highlight the need for shark protection on St. Maarten and the surrounding islands. Sharks are vital to the health of the marine ecosystem and as such have been legally protected on the island since 2011.

“Sharks play an important role in the health of our marine ecosystem which leads to greater biodiversity, healthier fish stocks, and a stronger reef system. The coral reef protects us from storm surge during hurricanes, helps keep our water clean and clear, and draws in tourists to sustain us financially. Defending the reef and the marine life that lives there is vital for the future of St. Maarten,” says Leslie Hickerson Educational Outreach Officer for the Nature Foundation.

The Caribbean Reef Shark that was entangled in the net in the marine park had started to decompose and could have been in the net for several days. While it is uncertain what caused the shark to end up in this condition there are two probable causes. Either the shark was caught in a net deployed by fishermen who then decided to abandon the net causing the shark to drown, or the shark became entwined in a drifting net that had been discarded or lost at sea often called a ‘ghost net’.

Ghost nets are part of the ongoing problem of marine debris and human impact. One of the largest contributors to ocean pollution, a 2018 study showed that ghost nets make up almost 50% of the Great Pacific Garbage Patch. In addition to ghost nets, other debris can cause injury or fatality to marine animals. In December of 2019, the Nature Foundation found a sea turtle in Great Bay that swam into an old chair and subsequently drowned. It is important that we dispose of our garbage properly so that it does not end up in the ocean as marine debris. Boaters or divers who spot debris in the water are also asked to collect all garbage they find in the waters around the island, to prevent further harm to marine life.

It is unclear how the Sandbar Shark in Cupecoy ended up beached. While it can be a sign of distress, injury or confusion this does occur from time to time. While the shark spent some time caught in the waves on the sand a resident intervened to assist the shark back into the water.

“We were so happy to see that a local resident stepped in to help this animal in distress. It shows that the people of St. Maarten can see that there is nothing to be feared from sharks, especially in this situation where the animal is suffering and needs help. We hope that more people are inspired by the work of this good samaritan and help us to take steps in protecting the natural environment of St. Maarten and stop the irrational fear of sharks,” says Nature Foundation Manager Melanie Meijer zu Schlochtern.

Residents are asked to report such incidents to the Nature Foundation which monitors and records these events to track potential changes in the environment of St. Maarten. If you ever need assistance or advice on how to deal with an animal on the island you can also contact the foundation via Facebook or by email at This email address is being protected from spambots. You need JavaScript enabled to view it..