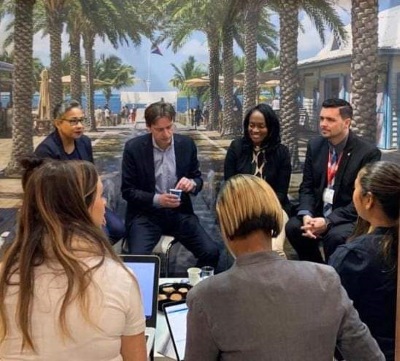 PHILIPSBURG: --- "A golden opportunity to truly promote economic activity throughout our island and to further strengthen the Memorandum of Understanding (MOU) with our French Side counterpart has been missed," remarked Stuart Johnson former Minister of Tourism, Economic Affairs, Transport and Telecommunications (TEATT).

"I would like to praise all the hotels/guest houses, supporting businesses, and hospitality employees that are embracing a staycation type concept. However, from the Dutch Side Tourism Office there is a lack of a structured plan," Johnson said.

We should have jointly engaged in a staycation campaign with our French Side counterparts. During my tenure, it was highly praised for the strong cohesion in the one island unity approach even with our marketing efforts when we met with tourism stakeholders locally and abroad.

"Those businesses that benefited from the stimulus program, SSRP should have been incorporated with a joint staycation plan. It truly is a golden opportunity missed and one which could have yielded more positive results for our economy," Johnson stated.

"In times like this, all that is happening and what should be happening for the benefit of all should transcend politics. We need a united, all hands on deck approach and a Government with a plan on how the country will move forward. It's obvious the latter is seriously lacking in this government," Johnson stated.

"Preaching unity on St.Maarten/St. Martin's Day or in discussions about our national border points must be a consistent effort by all otherwise it will simply seem as hypocritical at those moments," Johnson concluded.

File photo: One of several trade shows attended jointly by officials of both sides of the island.