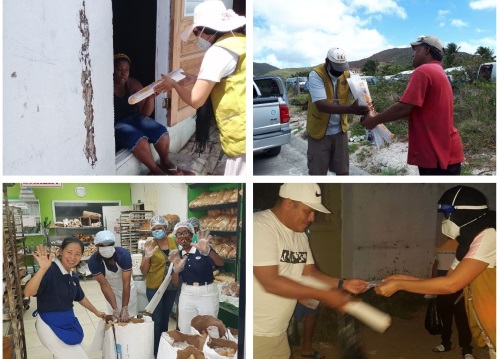 PHILIPSBURG:--- Many families facing hard times during the COVID-19 lockdown in St. Maarten over the past months, were able to at least have something to eat and feed their families thanks to the St. Maarten Tzu Chi Foundation, which distributed 16,394 loaves of bread to residents around the country as part of its COVID-19 emergency aid.

When the lockdown began and the foundation realized that many families were hurting as many persons had lost their jobs and many had reduced income, it sprang into action and mobilized its volunteers in the various districts to be able to assist for the emergency aid.

The bread distribution began on April 11, during the period of total lockdown when no supermarkets had been open for residents to obtain bread and other food supplies. Volunteers, who had disaster passes and could have moved around at the time, took time out of their schedules to help the foundation take the bread to families in the various districts.

Many families were very grateful for the donation, with many commenting that they were appreciative of the bread as they had not had any in a long time.

In addition to residents, the foundation also ensured that essential personnel who were working hard during the lockdown to keep the community safe were also provided with bread. Loaves of fresh bread were donated daily to establishments such as St. Maarten Medical Center (SMMC), St. Maarten Police Force, White and Yellow Cross Care Foundation and senior citizens center amongst other essential operations.

From Cole Bay, Cay Bay and Dutch Quarter to Sucker Garden, Pointe Blanche and St. Peters, volunteers went into just about every district making sure that bread had reached persons in need.

As businesses began to reopen and the country began to deescalate its lockdown measures, the foundation scaled back its bread distribution which ended on Friday, May 22, and focus is now being placed on assisting the most vulnerable in the community with emergency food packages containing essential items such as rice, flour, oil and biscuits etc.

A total of 816 volunteers participated in the massive effort from the foundation.

Many volunteers who participated in the program, were touched by the experience and expressed gratitude in being able to assist. Many lauded the foundation for its efforts in coming to the aid of so many persons in the community and helping persons with something that can maintain their sustenance during the State of Emergency.

Tzu Chi St. Maarten Commissioner Sandra Cheung is grateful to all the volunteers who came together to assist in the exercise and is thankful to recipients for graciously accepting the donation of breads. She is also grateful to the St. Maarten Tzu Chi Foundation Founder Master Cheng Yen for her support of the initiative and for coming to the aid of the community of St. Maarten in such a big way.

She said the Tzu Chi Foundation is always happy to assist the community in times of disaster and hardship and reminded that it is through the combined effort of everyone that assistance can be provided to those in need.

Tzu Chi Foundation is sustained by love donations made by members of the community and anyone interested in supporting the efforts of the Foundation with tokens of appreciation so that it can continue its work, can do so by connecting with any volunteer or with Cheung at Tzu Chi Foundation’s office on L.B. Scott Road near Cake House Supermarket.