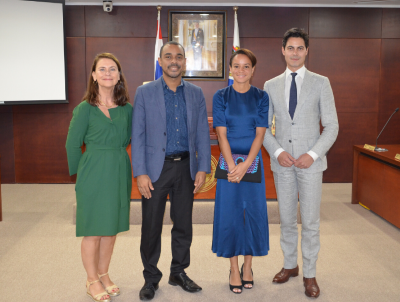 PHILIPSBURG:--- On Monday, February 24, 2020, the President of Parliament, Mr. Rolando Brison met with Member of the European Parliament, Ms. Samira Rafaela and Members of the Second Chamber, Mr. Rob Jetten and Ms. Antje Diertens, all from the Dutch D66 party.

During this meeting Member of the European Parliament, Ms. Rafaela adequately expressed the importance of learning and understanding the current situation on the island of Sint Maarten and gaining clear insight as to what is important to the people. She expressed her objective to develop a better relationship with Sint Maarten as the next generation wants things differently in the Kingdom of the Netherlands however, she explained, to move forward a change of mindset is required. Ms. Rafaela further stated, there is a great opportunity and potential to make things better.

The President of Parliament, Mr. Rolando Brison expressed to the parties in attendance that Sint Maarten has gone through quite a shift overall as more young people have been coming into the fold not just in the political arena but across the business sector and the executive branch of Government. Mr. Brison further stated that he believed that the previous generation of leaders is more allowing and receptive to new leadership.

Both parties agreed that more awareness is needed as to what OCTS are and what legislation is applicable to them. Parties also expressed willingness to provide ongoing support and agreed to maintain contact with each other.

At the end of the meeting, the President of Parliament Rolando Brison expressed his sincere appreciation to Member of the European Parliament, Ms. Samira Rafael and the Members of the Second Chamber for the courtesy visit to the House of Parliament.