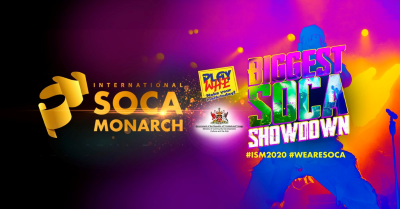 The event is being billed as the biggest Soca Showdown in the world, featuring a host of male and female entertainers vying for the title of Soca Monarch 2020.

According to Manager, TV15, Mr. Davey Woods, TV15 is collaborating with CCN TV6 in Trinidad to secure the exclusive broadcast rights for St. Maarten from the Queen’s Park Savannah in Port of Spain starting at 8:00 pm.

Organizers say the International Soca Monarch contest will feature a Power Soca Category and a Groovy Soca category with the whole mass of entertainment and talent in the mix.

“This is the first time that TV15 is broadcasting this event together with other islands to music lovers and Trinidad & Tobago nationals in Antigua, Barbados, Grenada, St. Kitts, BVI, and Jamaica,” said Mr. Woods.

He says the event is scheduled to run for six hours from start to finish Friday.

“TV15 is very excited about these developments because of our goal this year is to bring more live broadcasts of special events to tele-viewers on St. Maarten, especially events from around the Caribbean itself,” said Mr. Woods.

The International Soca Monarch competition has become the mecca event for soca artists in Trinidad and Tobago (T&T) where the event has been hosted since its inception; and also the rest of the Caribbean region, as many artists who have competed on its stage have moved on to successful soca careers. Dubbed the "Super Bowl of soca music" it is a highly anticipated and well-attended event that has been graced with internationally acclaimed recording artists such as SuperBlue (Austin Lyons), Machel Montano, Fay-Ann Lyons, Kevin Lyttle, Rupee, and Bunji Garlin (Ian Antonio Alvarez).