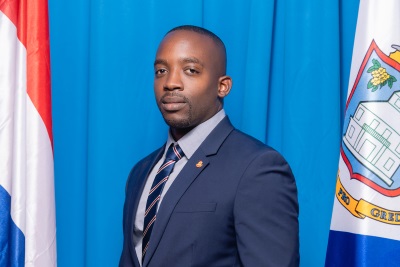 Looks forward to a supporting motion of parliament

PHILIPSBURG:--- Minister of Finance Irion intends to exhaust every possible option to issue the payment of police officers back-pay. The funding for this was made available through the Initiative Law by MP Rolando Brison through the sale of UTS. Half of the proceeds from the sale as prescribed by that law already in government’s coffers.

“The government has already executed the sale based on the initiative law, but never took the necessary steps to ensure the funds could go to the intended purposes: paying all police officers, immigration officers, and other justice workers money owed to them from having been in their wrong scales for so long” Irion stated.

Minister Irion was surprised to find that his predecessor would play on the emotions of the Justice workers by signing a Ministerial Decree that was grossly incorrect in regard to acquiring their rightfully earned fund. “The issue is that a Ministerial Decree is the incorrect tool for such a large financial commitment of the country. The Minister should probably have known better, so I have no choice but to believe that this effort was ingenuine and simply a political stunt. It’s truly disappointing.”

The execution of this payment falls under the auspices of the Ministry of Finance, as this ministry must execute the necessary budgetary transfers. A central part of making the payment work would be a measure made possible by Article 50 of the National Accountability, which allows the Minister of Finance to depart from the National Budget if a) there is an acute need to deviate from the budget in the National Interest and b) in the event the unanticipated urgent needs during the service year, for which no provision is made in the budget.

“Being that the budget doesn’t currently contain the budget allotment for this sale, the Ministry of Finance will seek the support of parliament. Parliament, by means of a motion, can help establish a clear national interest as sought when making use of Article 50 of the Accountability Ordinance. It goes without saying that paying our justice workers is in the national interest. A motion of parliament will further strengthen the legal steps I can take by means of Article 50,” said minister Irion.

The Minister is hoping that all goes well, and the payment can still be processed before year-end, despite the time squandered by the previous government. “Had the government taken the correct steps regarding the funds made available by the UTS Law, I could more confidently state that the payment would be ready immediately. However, it seems in the same way the Minister of Finance dropped the ball on the sale of UTS and was picked up by MP Brison, I too must pick up the ball and try to ensure the funds go to the Justice Workers where they belong.”