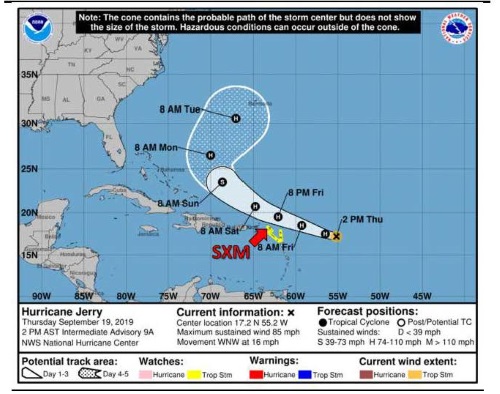 At 2:00 PM, the center of Hurricane Jerry was located near latitude 17.2 North, longitude 55.2 West or about 525 miles East-southeast of St. Maarten.

Jerry is moving toward the west-northwest near 16 mph (26 km/h). A west-northwest motion at a similar forward speed is expected over the next few days. On the forecast track, the center of Jerry is expected to pass approximately 120 miles to the north-northeast of St. Maarten on Friday night. Tropical storm effects of Jerry will begin on St. Maarten by Friday.

Maximum sustained winds have increased to near 85 mph (140 km/h) with higher gusts. Jerry could strengthen during the next day before some weakening begins this weekend.

Residents and the general public should put plans in place and continue to be alert and monitor the progress of this system.

The Meteorological Department of St. Maarten will continue to monitor this system and issue special weather bulletins.

Rainfall: Jerry is expected to produce total rainfall accumulations of 1 to 2 inches, with maximum amounts of 3 to 4 inches possible. Flooding and/or rock slides will become possible in flood-prone areas and along hillsides. Residents and users of these areas are advised to exercise caution.

Seas: Swells generated by Jerry are forecast to affect the island from later today. These swells are likely to cause life-threatening surf and rip current conditions. 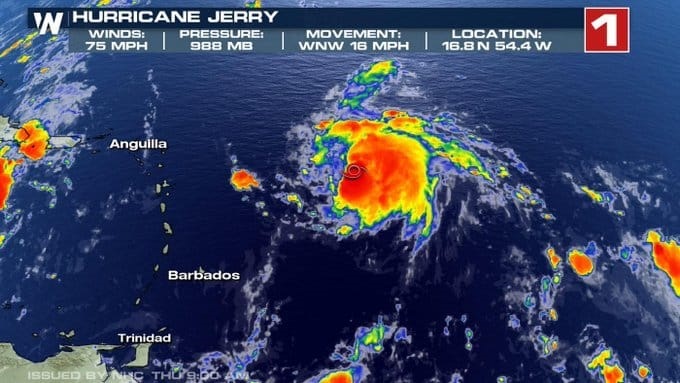 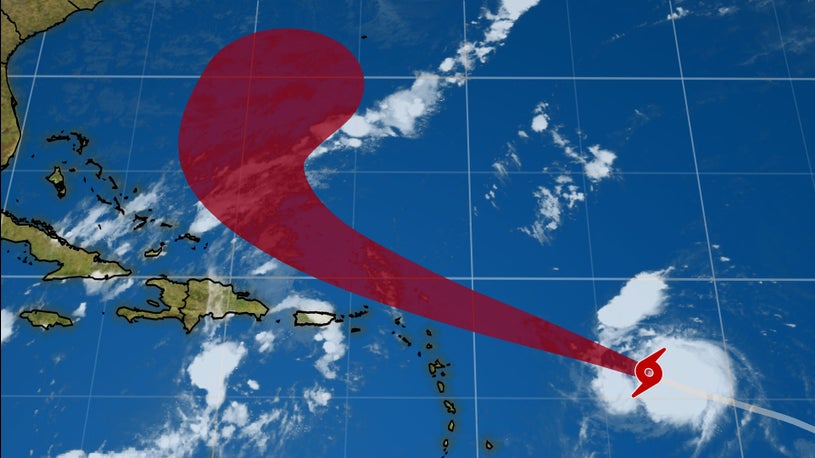 Tropical Storm Jerry is intensifying in the Atlantic and will likely move near or north of the Leeward Islands as a hurricane later this week.

Jerry is currently centered more than 500 miles east of the Leeward Islands and is tracking west-northwestward.

(The highest cloud tops, corresponding to the most vigorous convection, are shown in the brightest red colors. Clustering, deep convection around the center is a sign of a healthy tropical cyclone.)

Jerry is not expected to intensify rapidly due to dry air around the system, but the storm is predicted to become a hurricane on Thursday.

Jerry is currently forecast to track near or north of the northern Leeward Islands on Friday as a hurricane, then north of Puerto Rico on Saturday.

Tropical storm watches have been issued for the islands of Anguilla, Barbuda, St. Maarten/St. Martin, St. Barthelemy, Saba and St. Eustatius in the northern Leeward Islands. This means tropical-storm-force winds (39-plus mph) are possible within the watch area, generally within 48 hours. 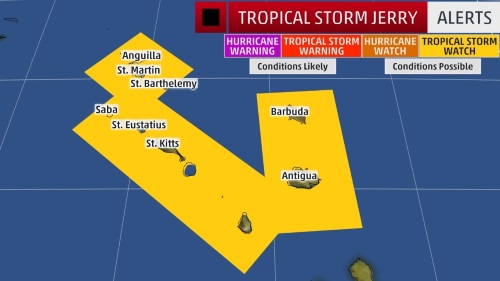 Even though Jerry will most likely track north of these islands, they could experience tropical storm conditions by early Friday. Moderate wind shear is expected to limit intensification late this week and into this weekend.

This system is expected to produce total rainfall accumulations of 1 to 2 inches – with isolated spots receiving up to 3 inches – across the northern Leeward Islands, the Virgin Islands and Puerto Rico.

Even if Jerry tracks well north of the islands, it will still generate swells that will affect portions of northern Leeward Islands by late Thursday. These swells are likely to cause life-threatening surf and rip current conditions.

It's still too soon to predict with confidence whether or not Jerry will affect the Bahamas, Turks and Caicos, Bermuda or the mainland United States.