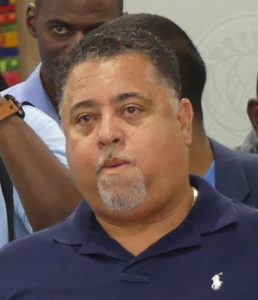 PHILIPSBURG:--- Leader of the USP and Member of Parliament Frans Richardson has been released from pretrial detention today Wednesday, September 11th, 2019 confirmed spokesman for the TBO Roderick Gouverneur.
MP Richardson who was arrested as a suspect in the ongoing BTP investigation was arrested last week Monday, he spent 10 days in pretrial detention. Richardson was expected to go to court again on Thursday but was released today.
It is the second time the Prosecution through the TBO team arrested the USP leader, the last time being in February 2018 where he also spent 10 days in pretrial detention. Richardson is also a suspect in the Squid and Emerald investigation.
On Monday the TBO and RST arrested director of BTP Anthony Carty and released him on Tuesday, yet no release was sent out on the arrest and subsequent release. The TBO did not even inform their own spokesman of the release of Carty on Tuesday and Richardson on Wednesday.
Clearly, the TBO and RST are on some sort of witch-hunting against local politicians because they keep arresting these elected officials and cannot provide evidence and or proof to the court of their alleged wrongdoings.
The constant arrests and release of these persons that are published worldwide have affected St. Maarten and its people, the economy and mostly the suspects and their families.