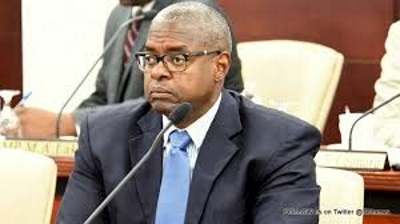 ~ Tax Payers will have to finance another faction leader in parliament.~

PHILIPSBURG:--- MP Franklin Meyers has taken the next step by sending a letter to the Parliament of St. Maarten indicating that he no longer supports the United Democrats and St. Maarten Christian Party coalition and has declared himself being an independent member of parliament.
The digital letter that is circulating through Whatapp as the official letter sent to the Parliament of St. Maarten is yet to be booked in at Parliament.
While MP Meyers gave a lengthy speech on Monday during the closing of the parliamentary year 2018-2019 as to why he pulled his support from the current coalition government he stated in his letter that moving forward he is open to discussion with the coalition to support them as an independent member of parliament.
Even though MP Meyers said on the floor of parliament and in his letter that he is disappointed for some time now with the consistent undertow by some of his colleagues MPs within his coalition and that he found himself agreeing with things he was not in agreement with the MP clearly shows that his actions are about gaining some power so that he could negotiate the things he wants to see happen in the executive branch.
With the decisions taken by MP Meyers the Parliament of St. Maarten who had to accept a budget cut will have to now finance another faction in parliament such as allowing the independent MP to hire staff at a time when the same MP said that the people of St. Maarten needed funds and were not getting it.
One of the main objective by the MP Meyers move is to send home the Minister of TEATT Stuart Johnson who already escaped from a motion of no confidence that MP Meyers voted against.

Below is a digital copy of the letter sent out by MP Meyers on Wednesday.

I would like to thank the United Democrats and the St.Maarten Christian Party, for allowing me to be part of this coalition. The coalition started out with the objective of rebuilding St. Maarten after the passing of hurricane Irma and to take decisions in the best interest and common good of the People.

Much to my disappointment and for sometime now there has been a consistent undertow by some of our fellow Members of Parliament within our own coalition.As a responsible member of this Government l can no longer support this government as it suffers through the consistent challenges of cohesion and oneness in the best interest of the People. I hereby declare my an independent member of Parliament.
Moving forward I’m open to discuss with the coalition my support as an independent member of Parliament.

It was my sincere wish to have the Government-run its’ term, uninterrupted, it is clear that personal agendas will continue to get in the way of proper execution of decisions for those that have elected us.

After extensive thought and consideration, I hereby withdraw my support from the present government. I sincerely wish that we could have held it together for 4 years...