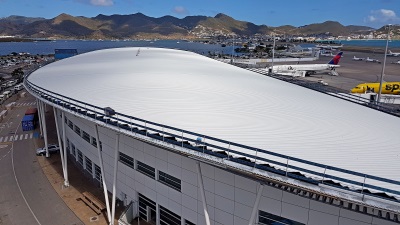 Airport:--- An arbitration panel consisting of arbitrators appointed by PJIAE, Nagico and the Court of First Instance of Sint Maarten has ruled in favor of the Princess Juliana International Airport (PJIA) in settlement of a USD 71 Million insurance claim against the company’s principal insurer, NAGICO. Under the terms of the arbitration ruling, PJIAE is awarded a principal claim (excluding interest) of USD 71, 864, 341 including the US$ 58 million that Nagico has already paid out to PJIAE in an advanced settlement.

The ruling was handed down on Wednesday, August 14th, 2019, and the total awarded is more than double the amount of USD 32,5 million that Nagico was willing to pay to PJIAE.

On Thursday, PJIAE Chief Executive Officer ( CEO) Mr. Brian Mingo, said while the settlement will greatly assist in the airport’s recovery and rebuilding plans, a good part of the funds (50%) has already been paid yet restricted. The insurance proceeds will be mostly used to re-build the airport’s main terminal in its upcoming reconstruction project.

Mr. Mingo said the claim has been awarded in PJIAE’s favor in the order of Material damage (USD 51, 269, 728), Business interruption damage (USD 17,963,013) and Cost of advisors (USD 2, 631,600). There still remains a matter of PJIAE’s claim for damage to furniture, for which management have been asked to provide additional information.

In the case of material damage to the airport, the arbitration panel has determined that the airport was not underinsured as Nagico had previously claimed and therefore could not apply the average clause which would have yielded a lesser amount in settlement for PJIAE. The panel however ruled that a 2% deductible amount of the insured sum could be applied by Nagico trimming the final amount for material damage only to USD 51,269,728.

Mr. Mingo said when an impasse was reached between the Airport management and Nagico insurance assessors last year, the natural step was to have an independent arbitration panel settle the differences between both parties.

“We have stated all along that we have a solid claim based on our policy with Nagico and I am very pleased that the management team held on to their resolve with the support of our legal representatives and were able to secure the balance of our claim against Nagico,” said Mr. Mingo.

Mr. Mingo concedes that some line items on the airport’s claims have been denied, however these denials did not form a substantial part of the total claim. He will however continue to pursue the claim for loss and damage to Airport furniture in keeping with another concession of the arbitration committee, so long as additional damage assessment reports and information can be provided.

The Managing Board of the SXM Airport would also like to thank all the teams who have assisted and participated with the process. PJIAE was assisted by its damage experts Mr. John Trupiano of Corgan and Mr. Mark Gallagher of Willis Towers Watson, its arbitration - legal team Mr. Eric R. de Vries and Mr. Michiel van den Brink of HBN Law & Tax and the excellent team of in-house professionals and employees of PJIAE, with full support of its supervisory board and shareholder, to whom we extend our gratitude.

PJIAE believes the outcome of the procedure is bittersweet, not the total amount that was claimed but the 51% awarded adds up and enables us to carefully plan and execute the reconstruction of the airport. We need to be careful how we spend the funds, on the real needs and improvements of the airport and the economy of St. Maarten.

The CEO, PJIAE, expects Nagico to settle payment on the balance of the claim with interest within the next few weeks, also with a proposal for compensation for the pending interior line item.

If we can get everyone on board and create a cooperation among all stakeholders our airport will be fixed quicker and easier. Our economy can then again thrive back to its glory days, anything else defeats our efforts.