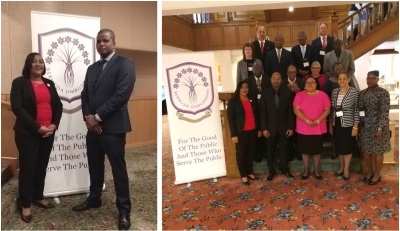 PHILIPSBURG:--- Ombudsman Gwendolien Mossel and Secretary General Randolf Duggins recently attended the 10th biennial Caribbean Ombudsman Association (CAROA) Conference which was held on the island of Bermuda from May 28th thru 29th, 2019. The theme of the conference was: “ Strengthening the role and performance of the Ombudsman and Human Rights Institutions in the Caribbean and Latin America”.

This year’s conference was hosted by the Ombudsman of Bermuda, Ms. Victoria Pearman, the current President of CAROA and Director representing the Latin America and Caribbean region on the International Ombudsman Institute (IOI) board. The conference was followed by a training session on May 30th and 31st led by Dr. Victor Ayeni who is a well-known international authority on the Ombudsman and related oversight institutions. The theme of the training was advancing the Ombudsman’s impact, role, service and performance.
Former Ombudsman Dr. Nilda Arduin was also a featured speaker at the conference.
Dr. Arduin spoke on the topic of addressing the public’s needs and learning experiences following natural disasters. Other topics addressed during the conference were: ‘strengthening relationships while maintaining independence’, ‘maximizing Ombudsman effectiveness: sharing lessons of good practices’ and ‘climate change and Ombudsmanship’.

At the ending of the conference a new board was elected. The new CAROA President, effective July 1, 2019 will be the Parliamentary Commissioner /Ombudsman of St. Lucia, Mrs. Rosemary Husbands-Mathurin, who will serve during the period 2019 – 2021.

The next CAROA Conference is scheduled to be held on the island of St. Lucia in May/June 2021. To learn more about CAROA, please visit the website: www.caribbeanombudsman.com.