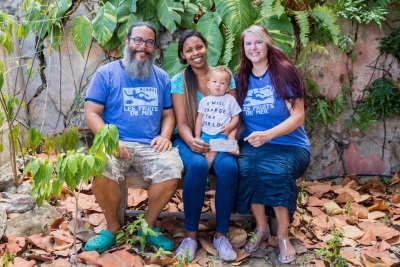 Grand Case:---The Be the Change Foundation has provided $800 in funding for Les Fruits de Mer’s Citizens of Change project. The project will highlight St. Martiners who have made a difference on the island. The stories of their work will be featured in an exhibit at Amuseum Naturalis at The Old House, and also online.

“We are thrilled that Be the Change and their local donors have supported this project,” said Les Fruits de Mer President Jenn Yerkes. “Local kids need a place where they can see the faces and read the stories of the people that made St. Martin what it is. It is one of our goals for Amuseum Naturalis and something this project will do.”

The first installment of the project will feature about a dozen people. The project aims to spotlight a variety of people, including teachers, writers, artists, builders, farmers, craftsmen, cooks, parents, and storytellers. During March, Les Fruits de Mer requested nominations from the public. Based on those nominations, the association decided to focus first on St. Martiners who have passed.

“As we started researching, we realized it’s already difficult to find information and images of St. Martiners from the past,” explained project leader Mark Yokoyama. “In many cases, we feel like we’re racing against the clock to find and document these exceptional lives.”

The first installment of exhibits from Citizens of Change project will debut later this year at Amuseum Naturalis. The museum welcomes further submissions of people to feature, and information and photos that can help tell their stories.

Amuseum Naturalis is open from 9am to Noon Tuesday to Saturday and admission is free. It is located at The Old House, on the hill above Galion Beach in French Quarter. More information is available at http://amuseumnaturalis.com.