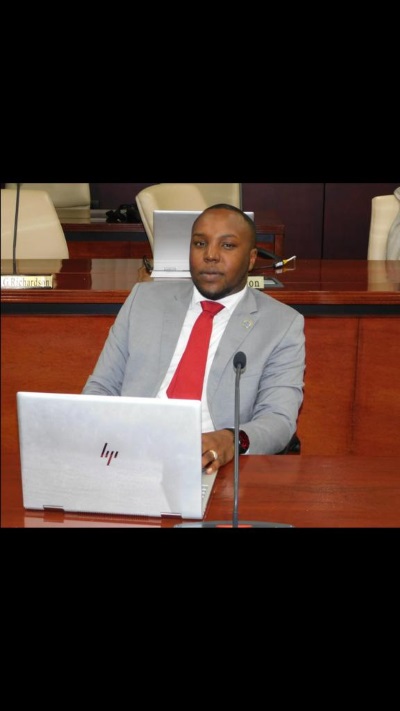 PHILIPSBURG:--- It was quite apparent to many that the Minister of TEATT evaded the question posed by Member of Parliament Doran during Friday’s CTEATT meeting.
Minister of TEATT Stuart Johnson stated during the meeting that the hiring process of the airport’s new CFO is in its final stages. MP Doran then asked the Minister if he thinks it is ethical to be finalizing the process of employing someone, without following the proper channels like advertising the vacancy in the newspaper, so that a local person could have the opportunity to apply. Minister Johnson broadly elucidated that he believes that the patrimony of local people should be protected. However, he never answered the question that was posed. When MP Doran asked for clarification and pointed out that the Minister did not answer his question, the Minister offensively said that he would ‘dumb-it-down’ for the Member of Parliament.

MP Doran stated that it came as no surprise to him that the Minister would stoop so low regarding a question that has the people of St. Maarten at the forefront. Doran said that the Minister often gives broad responses that ‘sound good’ but have no substance and do not answer the questions posed by the Members of Parliament. Though the Minister stated that he believes that ‘the patrimony of the local people should be protected’, Doran challenges the honesty of this statement. “It is clear that the Minister of TEATT together with other Ministers, are selling out our Country one managerial position at a time. It is also clear that they do not consider the local people to be competent enough to hold these positions. If they do, then why are they so submissive to the Dutch government? Why did the Minister of TEATT allow Mr. Mingo to imply that our local people cannot hold the CFO position because they do not have the ability to crunch numbers? Why are they so lackadaisical and not fighting for the people in which they swore to serve? The people are being left behind and forgotten time and time again. It’s really a sad situation. When the Minister stated that the hiring process of the CFO was in its final stages, I simply asked him if he thought that the process was done ethically, as it was not advertised for locals to apply. I asked this question because it became clear to me that yet again, the people of St. Maarten were being robbed of an opportunity in their own country. It really bothered me, so that is why I could not let the agenda point close without seeking clarity”, Doran stated.

The Member of Parliament also stated that the shareholder reps., which is the Minister of TEATT, is at the top of the chain-of-command. The Minister is then followed by the holding company (PJIAH) and then the operations company (PJIAE). He further explained that based on the chain-of-command, if there is an open vacancy on the managerial board, the Minister has a responsibility to instruct the Director of the holding company (PJIAH) to start the hiring process. Therefore, it is questionable that the Minister would imply that the hiring process has nothing to do with him. It seems as if Minister Johnson has no clue as to how the process goes based on his distancing himself as if he is not at the helm.
Doran suspects that the reason that the Minister avoided his question is because the position is already filled by a non-local candidate brought forward by the Dutch Government.
“It is sad to witness the Minister’s lack of passion for our people. His deflection will not deter me from standing up for the people of St. Maarten and demanding answer to the questions that they deserve. I will continue to serve my country, focused and unphased”.