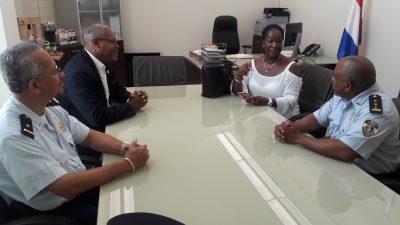 PHILIPSBURG:--- Retired New Haven Police Captain, Patricia Helliger will be donating seven bikes to the bike patrol of the St. Maarten Police Force. Helliger made this announcement to Minister of Justice, Cornelius De Weever, Chief of Police Carl John and Assistant Chief of Police Benjamin Gout on Monday, May 13, 2019.
“I am very grateful to Ms. Helliger a daughter of the soil for the donation she is making to the Police Force, the bike patrol can definitely use these additional bikes,” said Minister De Weever.
Helliger originally from St. Maarten moved to the United States at a young age, and made history in 2016, as the first black female police captain in New Haven. For years, Helliger also organized community outreach programs. She put together toy, food and coat drives for needy families, and she coordinated visits to city schools by cops from foreign countries, as a way to familiarize students with the diversity on the force. Most recently, she paired senior citizens with neighbors who could check in on them.
After the devastation that Hurricane Irma brought to St. Maarten and the loss that Helliger suffered by losing her mom due to the storm, she felt motivated to give back.