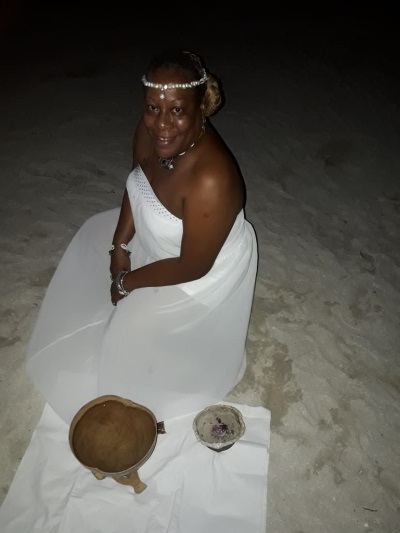 Awareness of Domestic Violence and Abuse

PHILIPSBURG:--- In awareness of Domestic Violence, Rape and Abuse VOICES (Victory-Over-Injustice-Consciously-Eliminating-Silence) Foundation will be holding an All White Full Moon Empress and Emperor Healing Ceremony. The Full Moon Healing Ceremony is to allow persons to tap into their inner universal light and recognize that they are not a victim they are victors. There are much violence and abuse in the world and on St. Maarten there is no different says Founder and President of VOICES Foundation Ms. Nkosazana Esther Illis.
VOICES Foundation has been hosting the All White Full Moon events for the past eleven months for women only. This November Full Moon marks the one year anniversary and because it’s the awareness of Domestic Violence, Rape and Abuse month VOICES saw the importance of including men. It is very important and necessary that both men and women are empowered. The moment we begin to change our thoughts in a positive way, then our environment will also change in a positive way says Ms. Illis.
Students and staff from the schools were asked to dress in the color lilac (purple) on Friday, November 23, in observance of Domestic Violence and Abuse month. In addition, VOICES will be speaking at the St. Maarten Academy PSVE and Academy to bring awareness of Domestic Violence and Abuse to the students.
The general public is hereby invited to commemorate the day. This event takes place on Friday, November 23, in front of Sea Palace on Great Bay beach from 7pm to 9pm.