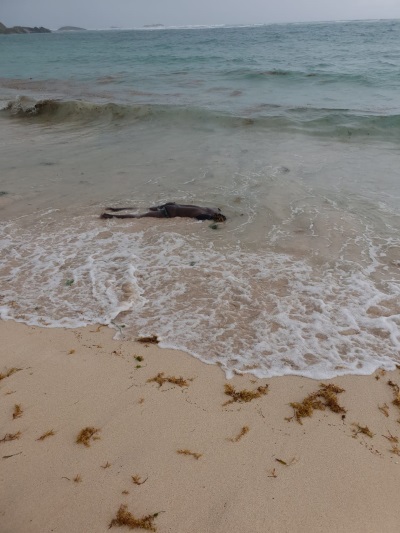 Oyster Pond:--- A video circulating on Social Media shows Gendarmes pulling a lifeless body out of the sea. The male seems to have drowned.
Colonel Sebastien Manzoni confirmed that the body was found in the sea on the way to Oyster Pond. Manzoni said the discovery was made during the morning hours on Tuesday. He said the case is being viewed as a case of drowning. More information will be provided in a press release.

A press release from the Gendarmes states that this morning at 9:30 am, a witness reported to the Gendarmerie of SAINT MARTIN the presence of an inert body at the beach of Lucas Bay in Oyster Pond.

Quickly on site, the gendarmes confirm the presence of a lifeless body of a male of Caribbean origin, aged 20 to 30 years whose identity is ignored. For the moment, the causes of death are unknown. A judicial inquiry under the direction of the public prosecutor is opened and is entrusted to the Research Section to determine the reasons for the death.

The gendarmerie engaged on the spot, soldiers of the brigade of Marigot, the brigade nautical, the Section of Investigations and the Technicians in Criminal Identification of La Savane.

Anyone who can provide information to identify the deceased person is invited to contact the 17.