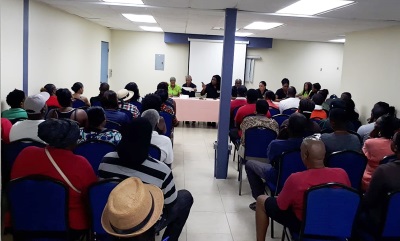 PHILIPSBURG:--- All is set with a booth for Carnival 50. The St. Maarten Carnival Development Foundation (SCDF) hosted the first of three booth holder meetings on Thursday night as the next step in preparation for Carnival 2019.

In the first meeting on Thursday, the foundation went over basic information with the booth holders, 54 of whom will be returning booth holders. There will be 13 new booth holders for Carnival 2019. Topics such as payment dates, booth pass, moving in and out of Carnival Village, booth helpers acquiring food handler’s certificates and more were discussed in this first meeting.

“All of our booths have been allotted and booth holders will now start their preparations for what we anticipate will be a terrific Carnival season. Every year we make sure that the information sharing between the SCDF and booth holders is very clear by opening registration early and having three meetings in the months leading up to Carnival,” the foundation said.

“It is extremely important to us that we are all on the same page. The booth holders and SCDF together prepare Carnival Village, the heart and soul of Carnival. So from now until the opening of Carnival, there will be a lot of work to be done, so early preparation is a must. We are not past the registration and allotting of booths, now it’s time to get ready for Carnival,” the foundation added.