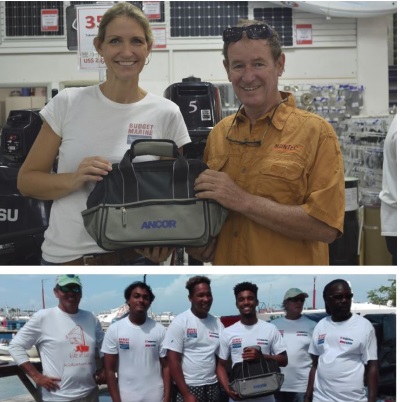 PHILIPSBURG:--- Working in a visible spot has it perks for the Kidz at Sea. They have set up their workshop under the dinghy tent on the Budget Marine premises. The hardworking group of rotating youngsters has been busy reconstructing a Lighting for 3 months on the grounds of Budget Marine with their team leader Jon Westmoreland, a seasoned local sailor. They certainly have been noticed by the regular customers of Budget Marine.
Roger Smith from Maintec, a daily customer at Budget Marine, won an in-store raffle of an Ancor Toolbag containing brand new Ancor tools with a value of $250. As he has been making conversation with the boys outside, he knew their next project would involve electrical work. When claiming his prize he announced to Ellen van Holland Little that he will be donating this wonderful Ancor Toolbag and tools to the Kidz at Sea! “This comes in very handy for our next project, especially the crimping tool.” said Garth Steyn, the main driver of the Kidz At Sea initiative and the Build YourFuture Program.
The Kidz At Sea Foundation plays a vital role in getting local vocational school children and young adults interested in waterborne activities that will hopefully lead them into a career in the marine industry. Ellen van Holland-Little of Budget Marine St.Maarten added: “Budget Marine could not be happier with the events that took place as these kids are the future of our industry. We invite our customers to encourage the team busy on the Budget Marine premises when coming to the store.”