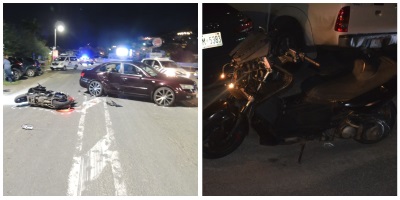 PHILIPSBURG:--- The Police Traffic Department is presently investigating a traffic accident which took place on Welfare road in the vicinity of Snoopy’s bar on Sunday September 30th at approximately 10.50 p.m. A pedestrian identified with initials R.G. while crossing the street was struck by a scooter ridden by the man identified with initials M.L.V. The scooter rider as a result of the accident lost control and fell to the ground.
The pedestrian suffered a broken left arm, a broken right ankle, an open wound to his right leg, open wound on his right hand and numerous bruises to his body.
The scooter rider suffered a concussion, a broken nose and complained of pain in his neck.
Both victims were treated on the scene by paramedics and then transported to the Sint Maarten Medical Center for further treatment.

Traffic accident/one injured
The Police Traffic Department is investigating a traffic accident which occurred on Monday, October 1st on Welfare Road in the vicinity of Market Garden at approximately 01.25 a.m. The accident was between a private vehicle with license plate M-667 and a scooter without a license plate.
The scooter impacted the rear passenger door the private vehicle which drove out of the parking area on the Welfare road.
As a result of the accident, the scooter rider suffered a wound to his head. He was treated on the scene by paramedics and then taken to the Sint Maarten medical center for further treatment.