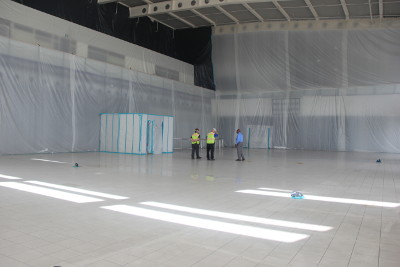 ~Completion of Terminal Building Scheduled for 2020~

AIRPORT:--- Management of the Princess Juliana International Airport (PJIAE) expects to move the airport operations back into the Terminal Building in November 2018. The new location will be temporary until the entire Terminal Building is restored.
Chief Operations Officer Michel Hyman told SMN News that the waterproofing of the Terminal Building roof has been completed and now they are busy with the second phase while they hired the services of BMS Cat that is also busy with the mold remediation. BES Cat is a company that hails from Texas and they are specialized in mold remediation.
At the moment some 60 persons are working for BMS Cat as they clean the building with special types of chemicals.
Hyman said that BMS Cat began the mold remediation in August and they are expected to complete the assignment by the end of September. The COO said that the remediation is taking place in an area they have described as package one which is where they intend to move in November temporarily to conduct the day to day operations of the airport. He said as of November both arrivals and departures will take place in the airport terminal building even though construction and other repairs will continue in other parts of the terminal building.
The intention is to have six gates, departure, arrivals as well as the concessionaires inside the terminal building. Even though the area would be much smaller the airport management team is doing all they can to ensure that the airlines, customs, immigration and the administration staff have working space.
Hyman further explained that while construction work will continue within the building the overall target date for the completion will be by the end of the first quarter of 2020. Hyman said that the Airport Terminal Building is a four-layer building and they have to ensure that everywhere is thoroughly cleaned to remove all the mold before they could occupy the entire building.